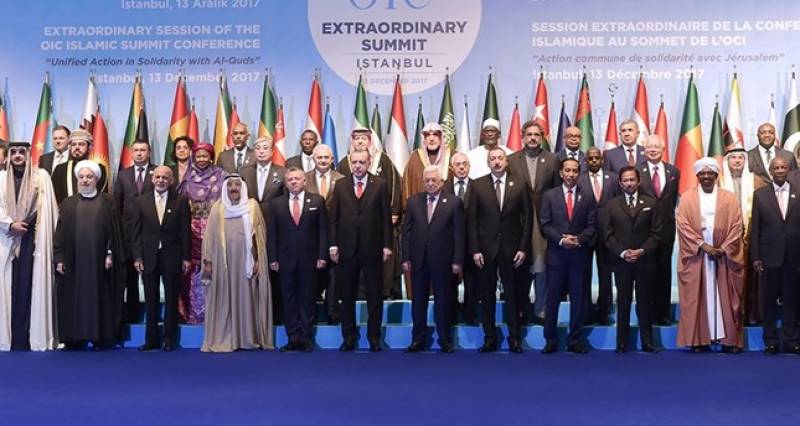 Istanbul (Agencies): Islamic leaders on Wednesday urged the world to recognise occupied East Jerusalem as the capital of Palestine, as Palestinian president Mahmoud Abbas warned the United States no longer had any role to play in the peace process.

Turkish President Recep Tayyip Erdogan convened in Istanbul an emergency summit of the Organisation of Islamic Cooperation (OIC) seeking a tough response to the recognition by US President Donald Trump of Jerusalem as Israel’s capital.

With the Islamic world itself mired in division, the summit fell well short of agreeing any concrete sanction against Israel or the US.

But their final statement declared “East Jerusalem as the capital of the State of Palestine” and invited “all countries to recognise the State of Palestine and East Jerusalem as its occupied capital”. They declared President Trump’s decision “null and void legally” and “a deliberate undermining of all peace efforts” that would give impetus to “extremism and terrorism”.

The status of Jerusalem — a city holy to Christians, Jews and Muslims — is perhaps the most sensitive issue in the Israeli-Palestinian conflict. Israel sees the entire city as its undivided capital, while the Palestinians want the eastern sector, which the international community regards as annexed by Israel, as the capital of their future state.

Mr Erdogan sought to underline his point with a powerpoint map presentation, flashing a laser pointer at how Palestinian territory had shrunk since the 1948 creation of Israel.

“The real proprietor of these lands is Palestine,” he told the final press conference.

“Mr Trump wants all this to be Israel. This is the product of an evangelist and Zionist mentality,” said Mr Erdogan, the current chair of the OIC.

Using unusually strong language and bitterly anti-American rhetoric, Mr Abbas warned that there could be “no peace or stability” in the Middle East until Jerusalem is recognised as the capital of a Palestinian state.

Moreover, he said that with Mr Trump’s move the US had withdrawn itself from a traditional role as the mediator in the search for Mideast peace.

“We do not accept any role of the United States in the political process from now on. Because it is completely biased towards Israel,” he said.

The final statement from the OIC echoed his words, saying President Trump’s move was “an announcement of the US administration’s withdrawal from its role as sponsor of peace” in the Middle East.

Mr Erdogan added that there could no longer be “any question” of the US being a mediator. “This period is now over,” he said bluntly.

Bridging the gaps between 57 OIC member states — which include arch rivals Saudi Arabia and Iran — was always a tall order. Key players, like Egypt, Saudi Arabia and the United Arab Emirates, were unlikely to want to risk their key relationship with Washington by putting their name to anti-American measures.

Iranian President Hassan Rouhani, Jordanian King Abdullah II and Lebanese President Michel Aoun were among the heads of state present, as well as the emirs of Qatar and Kuwait and presidents of Afghanistan and Indonesia.

But there was no sign of Saudi King Salman or his powerful crown prince and son Mohammed bin Salman, who has reportedly been in close contact with Mr Trump over the Middle East. Instead, Riyadh sent a senior foreign ministry official.

“Some countries in our region are in cooperation with the United States and the Zionist regime and determining the fate of Palestine,” seethed Mr Rouhani, whose country does not recognise Israel and has dire relations with Saudi Arabia.

But as the summit was being held, King Salman echoed the calls over Jerusalem in an address in Riyadh, saying it was the “right” of the Palestinians to establish “their independent state with East Jerusalem as its capital”.

Sudanese President Omar al-Bashir, who is wanted by the International Criminal Court for genocide and war crimes, was also in attendance and warmly greeted by Mr Erdogan. A surprise guest was Venezuela’s leftist President Nicolas Maduro whose country has no significant Muslim population but is a bitter critic of US policy.

Speaking at the OIC summit, Pakistani Prime Minister Shahid Khaqan Abbasi said a sovereign homeland for the Palestinian people with Al-Quds as its capital remained the only roadmap for the Muslim Ummah and the OIC.

“We are at the watershed moment again. The question on every Muslim mind today would be whether we can rise above our differences, stand united and give hope to our people, or once again adopt declarations which cannot be translated into effective actions,” the prime minister said.

He said the US decision was a blatant attempt to set in motion steps to change the historic and lawful status of the holy city, adding that Pakistan had urged the US to rescind, fully comply with all applicable UN Security Council resolutions and recommit unequivocally to the two-state solution.

“On behalf of the people and government of Pakistan, I wish to reiterate our strong condemnation of this decision,” he said and called upon the United Nations Security Council to play its role as envisaged under the UN Charter as its credibility would be questioned if it did not live up to its primary role in maintaining international peace and security.

The prime minister said Pakistan renewed its call for establishment of a viable, independent and contiguous State of Palestine, on the basis of international parameters, the pre-1967 borders, and with Al- Quds as its capital.

President Trump’s announcement last week prompted an outpouring of anger in the Muslim and Arab world, where tens of thousands of people took to the streets to denounce the Jewish state and show solidarity with the Palestinians.

The decision sparked protests in Palestinian territories, with four Palestinians killed so far in clashes or Israeli air strikes in response to rocket fire from Gaza and hundreds wounded.