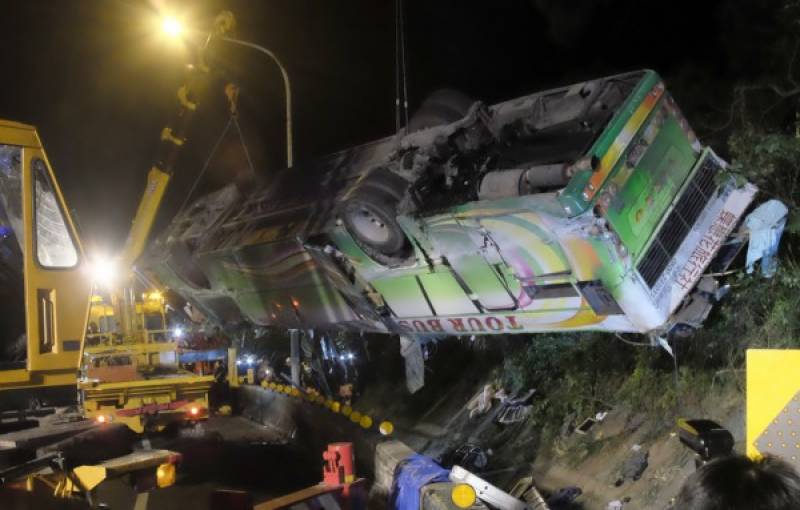 Taipei, Taiwan (Reuters): At least 32 people were killed when a tour bus over turned on a highway near Taipei on Monday night.

According to Taiwanese media, 44 people were in the bus when it overturned, not the previously estimated 45.

The fire department said, 30 people were confirmed as dead at the scene while two died at the hospital. The department further added that 12 people were still being treated in hospitals around Taipei, the capital.

Taipei City Deputy Mayor Teng Chia-ji stated that Many of the passengers were elderly, and the trip had been arranged by the Tieh Lien Hua Travel Agency.

The cause of bus crash was unclear. It was unclear what caused the crash. Local television showed a video of the bus shot from behind flipping onto its side and skidding toward the hillside after it hit a road barrier when negotiating a highway interchange curve.

Ambulances and fire trucks were lined up along the bend of the road as rescue workers used a crane to lift the battered bus from its wheels, after all the passengers were pulled from the wreckage.

The cabinet spokesman Hsu Kuo-yung said, "Prosecutors need to get on the site."

The crash is the latest accident involving tour buses in Taiwan. Earlier this month, another Taiwanese tour bus carrying Chinese tourists crashed into a bridge in southern Taiwan, injuring some passengers.

It followed a grisly murder-suicide last year in which 24 Chinese tourists were killed after the driver set their moving bus on fire.