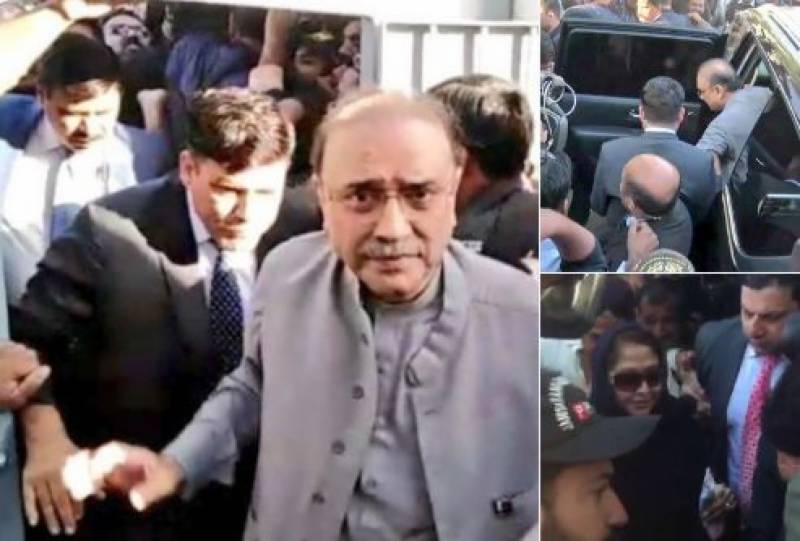 Karachi (Staff Report): A banking court on Thursday extended the interim pre-arrest bail of former president Asif Ali Zardari and his sister Faryal Talpur till March 5 in a case regarding money laundering through fake banks accounts.

During the hearing, the prosecutor of the Federal Investigation Agency (FIA) told the court that there was no justification to hear the suspects’ bail petitions.

At this, the counsel of Zardari and Talpur, Farooq H Naek, said, “It is the FIA’s responsibility to present a final challan.

The court then asked Investigation Officer Muhammad Ali Abro regarding headway made in the case.

The investigation officer responding to the court said that the record was being transferred to the National Accountability Bureau (NAB) on the orders of the Supreme Court (SC).

Zardari’s counsel Farooq H Naek said that the apex court had ordered that an investigation be conducted, not that a case be filed. If a case can be made, it should be filed, he said.

Naek in his arguments said that two months’ time was given and NAB has not been barred from filing a reference.

The court in remarked that the prosecutor should either submit a challan or a petition to transfer the case.

Meanwhile, the investigation officer said that he has been submitting a request for time to submit a final challan.

After hearing the arguments, the banking court accepted Farooq H Naek’s request and granted interim pre-arrest bail to his clients.

Later, the court adjourned the hearing of the case till March 5.

The FIA is investigating 32 people in relation to money laundering from fictitious accounts, including Zardari and Talpur. Zardari’s close aide Hussain Lawai was arrested in July in connection with the probe.

Over 20 ‘benami’ accounts at some private banks were opened in 2013, 2014 and 2015 from where transactions worth billions of rupees were made, according to sources.

The amount, according to FIA sources, is said to be black money gathered from various kickbacks, commissions and bribes.