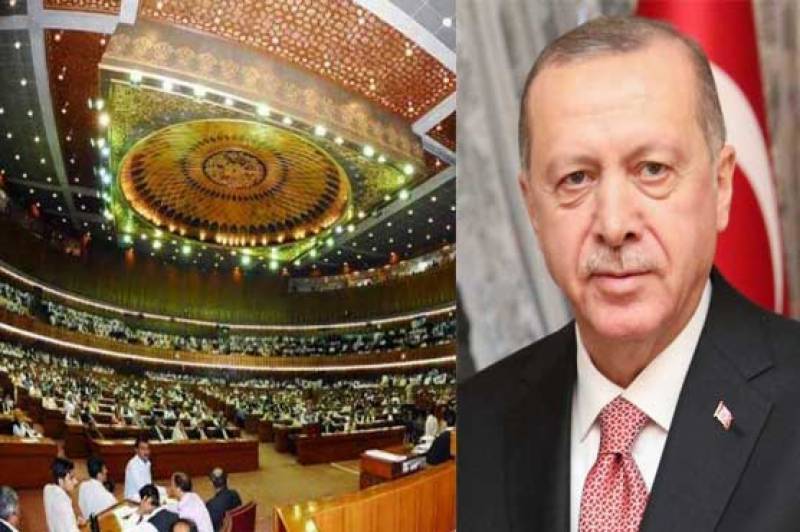 Islamabad (Staff Report/Agencies): Turkish President Recep Tayyip Erdogan – addressing a joint session of Pakistani Parliament for a record fourth time –reiterated his country's support for Pakistan and its stance on the Kashmir issue.

“I thank God for giving me this opportunity and I am thankful to each of you for allowing to address this session,” said the Turkish president.

Thanking people of Pakistan for the warm welcome, he said: “I have never felt like a stranger in Pakistan, it has always been like a home for me.”

"Today, Pakistan and Turkey's relations are admirable for others [...]. During difficult times, Pakistan has supported Turkey."

Quoting a poem by poet Allama Iqbal, Erdogan said: "Yes, like the poet of Lahore, people were drowning in these emotions, people of Pakistan had supported Turkey.

"We can never forget this.

"Today, the issue of Kashmir is as close to us as it is to you [Pakistanis]," he said, reiterating his support for Kashmiris.

“Like in the past, we will continue to support Pakistan in the future,” vowed the Turkish leader.

“Pakistan’s fight against terrorism is highly commendable and the country has been affected by religious fanaticism. The country has made enormous sacrifices.”

Pledging his continued support to Pakistan on counter-terrorism, the Turkish head of state said the two countries were the most affected by terrorism “due to their geographic location”.

“No one can break the bond of Muslim brotherhood in any way. Everyone should stand with one another.”

The Turkish president ended his speech by reciting a few verses of the Pakistani national anthem and prayers for the two countries and the Muslim world.