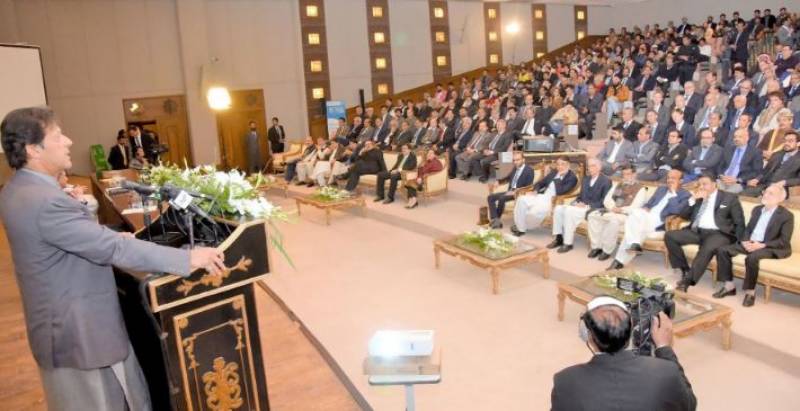 Addressing the ceremony in the federal capital, the prime minister said issuing of online visa is a major step towards bringing real change as it will open the country to the outside world.

The PM said it shows that Pakistan is a peaceful and stable country and open to the world for business and tourism.

He said the mindset regarding the allowing of foreigners into the country needs to be changed in order to portray a positive image of Pakistan to the world.

“The beautiful region of Gilgit-Baltistan of Pakistan is twice the size of Switzerland and there are still many unexplored areas in the area”, Khan said.

The PM said that a task force on tourism will make sure that proper facilities are provided to the tourists. He said the skiing resorts of Pakistan are unique in the world due to their topography.

“Religious tourism is another major area that needs to be explored. Religious sites of Buddhism, Sikhism, Hinduism and Sufism in the country can attract a large number of visitors from across the world”, the PM said.

Imran Khan said that ancient civilisations of the country will be introduced to the world. He said Peshawar is the oldest living city in human history and a historical part in the city developed with German cooperation will be opened for tourists soon. He said all the tourist sights and attractions will be properly advertised on a dedicated website.

The Prime Minister also said that work is also in the offing to promote beach tourism in the country by taking advantage of unexplored long coastal belt of Pakistan.

Imran Khan lauded the role of security agencies for their sacrifices to make Pakistan a secure and peaceful country. He expressed optimism that next PSL tournament will be held in Pakistan.

Imran Khan said the foreign missions in Pakistan will be activated to play a vibrant role in promoting tourism of the country in the world. Regarding ties with neighboring countries, he said Pakistan wants good relations will all the regional countries, including India.

He said the government of Pakistan Tehreek-e-Insaf (PTI) is fulfilling the wishes of people of Pakistan at economic, defense, foreign and other fronts. He said today's step is a major initiative towards “Naya Pakistan”.

He said Pakistan is more peaceful and stable country thanks to sacrifices rendered by armed forces and people of Pakistan.

Earlier, highlighting major features of the new visa policy, Minister of State for Interior Shehryar Khan Afridi said multiple visas to nationals of 96 countries will be granted within 24 hours of applying.

He said citizens of 175 countries can apply for online visa while people from fifty countries will be granted visa on arrival.

Afridi said initially citizens of five countries including UK, Turkey, Malaysia, UAE and China will be granted online visas in the pilot project.

He said foreign nationals of Indian origin will also be allowed to avail the facility of visa on arrival for religious tourism.

The minister informed that the average visa fee has been reduced from 22 to 65 percent. He said nationals of UAE, Turkey, Saudi Arabia, and Bahrain among others will be given multiple visas.