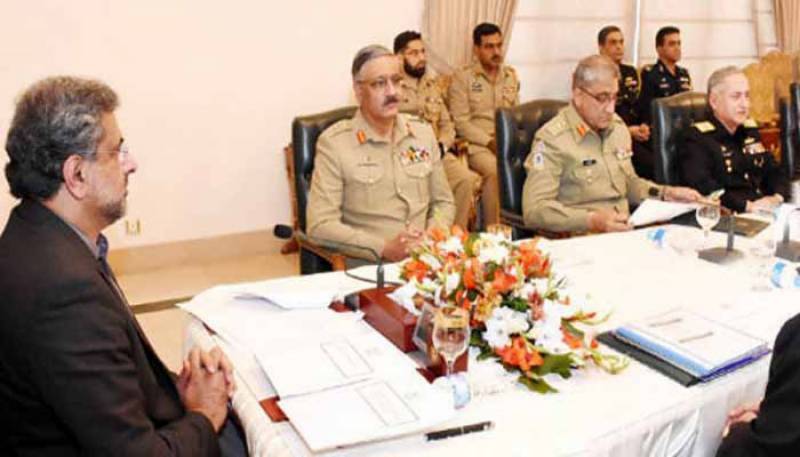 A statement issued by the PM Office said, "The participants observed that it was very unfortunate that the opinion arising out of either misconceptions or grievances was being presented in disregard of concrete facts and realities."

The NSC meeting also unanimously "rejected the allegations and condemned the fallacious assertions".

It also stated that India denied Pakistani investigators access to Ajmal Kasab, the convicted attacker who was hanged by India.

The statement said that Kasab’s hurried hanging by India impeded the investigation of the case, adding that India repeatedly denied assistance in the probe while there was complete cooperation from Pakistan.

The statement further said, "At the same time, Pakistan continues to wait for cooperation from India on the infamous Kulbhushan Jadhav and Samjhota Express episodes."

It concluded Pakistan will continue its efforts to eliminate terrorism on all fronts.

The chiefs of the navy, airforce, the directors general of military operations and military intelligence also attended the meeting.

Moreover, Defence Minister and acting foreign minister Khurram Dastgir were also a part of the meeting along with other top civil officials of the government.

It is pertinent to remember that the meeting was being held over remarks made by Nawaz regarding the terrorist attacks in Mumbai.

Nawaz , in an interview to Dawn newspaper, had said, “Militant organisations are active. Call them non-state actors, should we allow them to cross the border and kill 150 people in Mumbai? Explain it to me. Why can’t we complete the trial?”

His remarks were played up by the Indian media as an admission of Pakistan's involvement in the terrorist attacks.