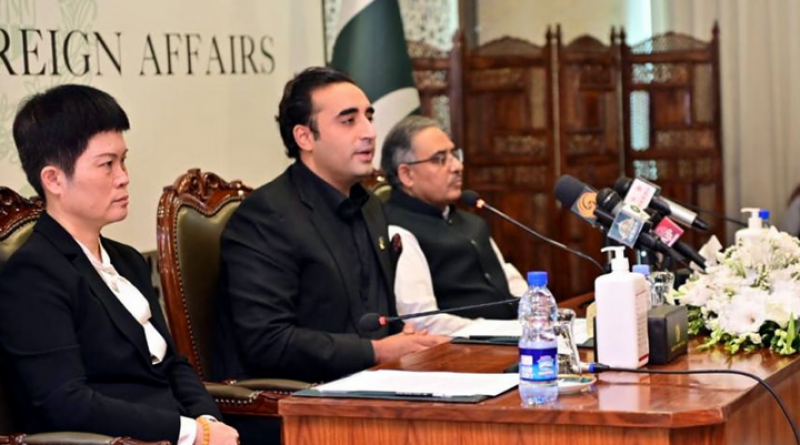 Islamabad (Web Desk): Foreign Minister Bilawal Bhutto Zardari on Saturday emphatically stated that nobody will be allowed to harm the iron-clad friendship between Pakistan and China.

He said this while addressing a condolence reference held at Foreign Office (FO) in Islamabad for the Chinese nationals who were killed in a suicide attack last month at the Karachi University 's Confucius Institute.

Expressing his anguish and shock over the Karachi incident in which three Chinese teachers were killed, Bilawal Bhutto Zardari said we will not rest till the perpetrators of this heinous act are given exemplary punished.

The foreign minister said that this was an attack on Pakistan-China friendship and will not be tolerated.

Bilawal said that these Chinese teachers were pursuing the noble mission to educate our students in Chinese language and building bridges between our two peoples.

He said that the sacrifices of both Chinese and Pakistanis in nurturing our bonds of brotherhood will not go in vain.

The foreign minister said we will continue to cherish and honor the sacrifices that have enabled us to forge a community of shared future in new era.

"Everyone is aware that our relationship with China is not limited to state-to-state, but it expands to people-to-people," the foreign minister said.

"The all-weather strategic cooperative partnership between Pakistan and China is time tested and timeless," Bilawal said, adding that we will face every challenge together and emerge even stronger. He said our Iron brotherhood will continue to grow.

In his remarks, Foreign Secretary Sohail Mahmood said Pakistan and China relationship has grown from strength to strength despite changes on the global and regional landscape.

"Pakistan and China always stood by each other and overcame challenges with solidarity and mutual support," the foreign secretary said, adding that we will defeat terrorism whilst working together in the same spirit of mutual trust and close collaboration.

Chinese Charge D'Affaires Pang Chunxue, in her remarks, stated the Chinese killed in Karachi University attack were the cultural ambassadors between Pakistan and China, and their remarkable achievements will be written in the history of this friendship.

She said that China will work with Pakistan to conduct a thorough investigation into the incident to bring the perpetrators to justice.

"China-Pakistan all weather friendship is deeply rooted in the hearts of our two peoples," she said, adding that the iron-clad friendship between Pakistan and China is unbreakable.

She said that any attempt to undermine the two countries mutual trust and cooperation and the construction of China-Pakistan Economic Corridor (CPEC) is doomed to fail.