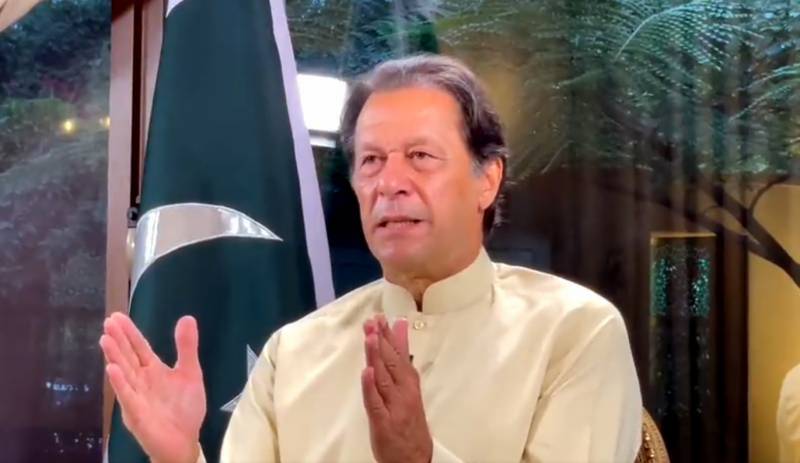 Lahore (Web Desk): Former premier and Pakistan Tehreek-e-Insaf (PTI) Chairman Imran has said that rule of law in a society is essential for any country in order to progress.

Addressing the participants of long march in Mandi Bahauddin via video link from Lahore, the PTI chief said that ensuring rule of law will bring prosperity and freedom.

"People ask me what my economic agenda is. If you want to bring prosperity in the country, you have to create justice. Only rule of law can ensure prosperity."

While giving the examples of top European countries, Khan said that they all prospered because they ensured rule of law.

Khan said that that he failed to register a first information report of the attempt on his life as per his wishes, he said that police didn't listen to us but powerful sectors. If this can happen to me, what will happen to the other people?," he lamented.

The PTI chief asserted that registering a first information report (FIR) of the attempt on his life in Wazirabad was his right.

He again called on the Supreme Court (SC) to probe the killing of Arshad Sharif, the alleged torture of Senator Azam Swati and Wazirabad FIR.

Lashing out at the Sharif brothers, Khan questioned how PM Shehbaz could consult with a convict on the appointment of the new army chief.

"This is a violation of the Official Secrets Act. We will consult our lawyers. How can he consult with an absconder and a convict regarding such an important decision."

Imran Khan said that Nawaz would never take decisions in Pakistan's interests and would just think about protecting his own.

Talking about his stance on diplomatic relations with the US, Imran stated that he wanted Pakistan to be on friendly terms with all countries but would not accept slavery at any cost.

Speaking about reaction following his interview with British newspaper Financial Times in which he stated that he had put the 'US conspiracy' matter "behind him", the former premier said that a propaganda cell is feeding journalists.

“They pick up things that I say and purposely misinterpret them,” Imran Khan said adding that the cipher was in the National Security Committee (NSC), parliament as well as with the president.

“What is the issue in this? When we say that we are moving forward, it means we want good relationships,” the PTI chief clarified.

“Our journalism has reached a point where even foreign journalists have to clarify their stories,” Khan added.

Addressing the marchers at Mandi Bahauddin, PTI Vice-Chairman Shah Mehmood Qureshi slammed Interior Minister Rana Sanaullah for his plans to use tear gas on the marchers once they reach Islamabad.

“Look at the faces of the PTI supporters I don’t see any fear among them despite the revelation of your plans,” he said

Earlier, PTI's Secretary General Asad Umar said that the nation is standing with Imran Khan for its 'real freedom' because “important decisions are being taken in London”.

“It has been 75 years since the British left, but even today major decisions related to Pakistan were being taken in London. This is why the nation has stood with its captain for its ‘Haqeeri Azadi’,” Asad said.