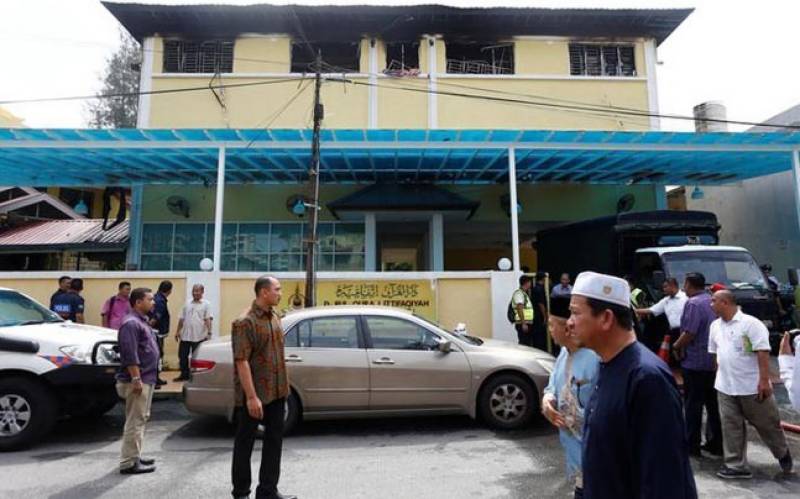 Kuala Lumpur (Reuters): A blaze at an Islamic boarding school in the Malaysian capital killed at least 23 people on Thursday, most of them teenage boys who cried for help from barred windows, officials and witnesses said.

The fire broke out at around 5.40 a.m. in a top-floor dormitory in the three-storey building, firemen said, where most of the students were sleeping in bunk beds, with many of the windows covered by metal grills. One survivor said there was just one window the boys managed to open.

Two teachers were also killed in the fire at the Darul Quran Ittifaqiyah, a 15-minute drive from the iconic Petronas Twin Towers in Kuala Lumpur, police said, adding that most of the victims died from smoke inhalation. The disaster has renewed calls for greater scrutiny of so-called “tahfiz” schools, where students learn to memorize the Quran. They are unregulated by the education ministry, being the responsibility of the religious department.

Deputy Prime Minister Ahmad Zahid Hamidi said at least 31 fires had been reported at such schools in Malaysia since 2011, adding that they must follow safety regulations.

“We will continue to carry out investigations, especially through forensics, as we found that there was some security features that should have been complied with but weren‘t,” Zahid told reporters outside the school.

Fire department operations deputy director Soiman Jahid said the cause was likely a short circuit or a mosquito repellent coil.

The dormitory had only one entrance, leaving many of the victims trapped, he said. “The building was surrounded by metal grills that could not be opened from the inside. The students, after realizing the fire and heavy smoke, tried to escape through the window,” Soiman said outside the school.

“But because of the grills, they could not escape.”