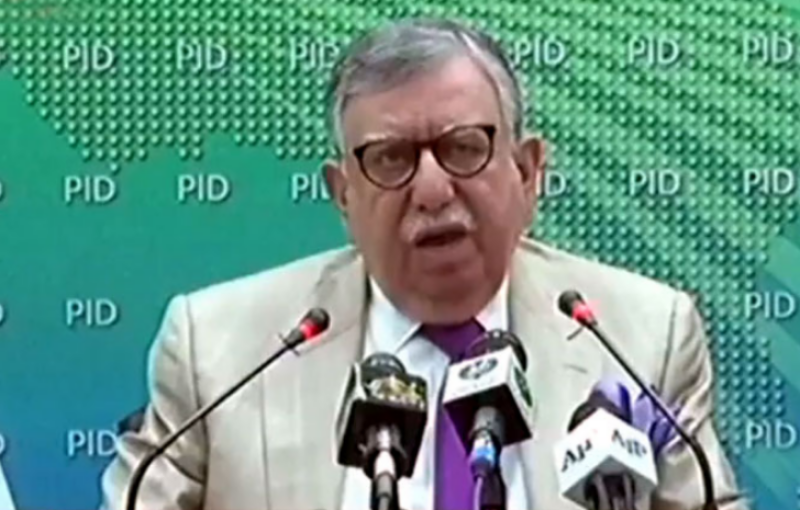 Islamabad (Web Desk): Finance Minister Shaukat Tarin has said the government will start giving targeted subsidies from this month to the weak segments of society on essential commodities including sugar, flour and pulses.

Addressing a news conference along with Minister of State for Information and Broadcasting Farrukh Habib and Special Assistant to the Prime Minister (SAPM) on Food Security Jamshed Iqbal Cheema, he said the targeted subsidy will be in the form of cash assistance, which will cover thirty five to forty percent population.

The finance minister said the government is also focusing on bolstering the agriculture productivity.

“In the medium to long term, commodity warehouses, cold storages and agri malls will be established with the aim to eliminate the role of middle man and ensure that the farmers get due price of their products,”Tarin said, adding that strategic reserves of major commodities are also being built in order to ensure smooth supplies in the market.

The finance minister said that the prices of wheat will see decline in the coming days.

Shaukat Tarin said that the government has tried its level best not to fully pass on to the masses the impact of international increase in the prices of commodities.

He pointed out that sugar prices increased by 48% in the world market but we only creased its price by 11%. Palm oil saw an increase of 50% but we increased the price by 33 to 35%.

Similarly the prices of crude oil and wheat were not enhanced as per the international market.

The finance minister said the government is also giving attention to enhance the incomes of the people to enhance their purchasing power.

Shaukat Tarin said that Kamyab Pakistan Programme will be launched this month in order to enable the weak segments of the society earn their livelihoods.

Shaukat Tarin said that the results of our growth strategy are visible and the revenue collection is increasing. He said we are on the track to achieve five percent growth during the current fiscal year. This, he said, will also help reduce our debt to GDP ratio.

Speaking on the occasion, SAPM Jamshed Iqbal Cheema said the prices of flour, sugar, Ghee and pulses would be reduced by December this year.

He said the government is targeting on ensuring quality and affordable price of milk; and a program to this effect would be unfolded in two weeks.

“There has been an increase in prices of energy, food and mettle from 34 percent to 129 percent in the world, which made an impact on the prices in Pakistan,” he added.