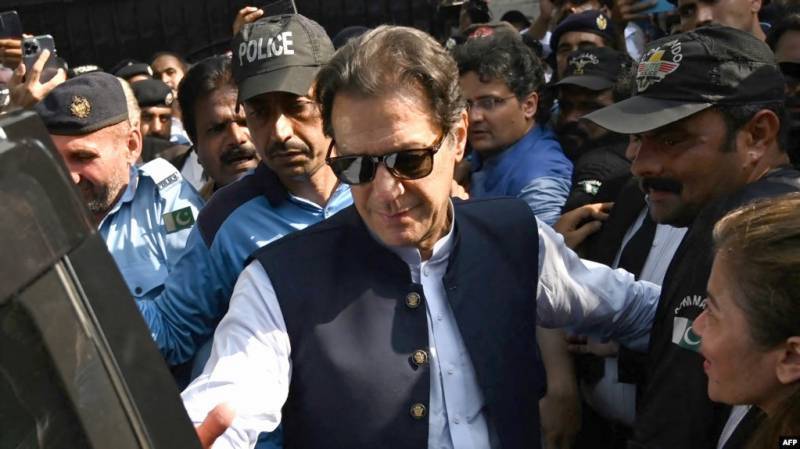 Islamabad (Staff Report/Agencies): PTI Chairman and former prime minister Imran Khan on Wednesday appeared before the Joint Investigation Team (JIT) to record his statement in terrorism case registered against him for allegedly threatening a female additional sessions judge at a public rally.

The PTI chief was booked for terrorism under Section 7 of the Anti-Terrorism Act for making controversial remarks against Additional Sessional Judge Zeba Chaudhry and officials of the Islamabad Police during a rally in Islamabad on Aug 20.

Imran Khan reached SSP office amid tight security days after he was directed by the Islamabad High Court to join the investigations in the case.

On September 6, a bench of the Islamabad High Court comprising IHC Chief Justice Athar Minallah and Justice Suman Riffat heard a petition filed by the PTI, seeking quashing of the case.

When Justice Minallah asked whether a challan has been submitted by police in the case, Advocate General Islamabad replied that the PTI chief was reluctant to join the investigations.

He said that police investigators were not being given access to Imran Khan. At which, the chief justice remarked: “A policeman represents the state”.

On Monday, an Anti-Terrorism Court (ATC) in the federal capital approved extension in pre-arrest bail of former premier till September 20.