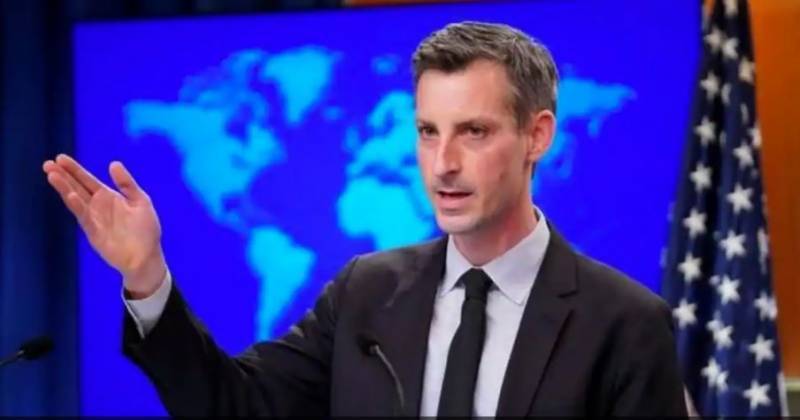 Washington (Web Desk): The United States (US) government on Friday once again rejected former premier Imran Khan's allegation of ousting his government through any conspiracy saying the US agrees with the statement of Pakistan Army's spokesperson.

The DG ISPR said he cannot discuss what was discussed in the meeting, but noted that the word "conspiracy" was not used.

The threat letter was first brandished by former premier during a public gathering on March 27, claiming the Opposition’s no-confidence motion was part of the conspiracy hatched by the US to oust him.

During his regular news briefing in Washington, US State Department spokesperson Ned Price once again rejected the allegations.

“Our message has been clear and consistent on this that there is no truth whatsoever to allegations that have been put forward. We support the peaceful upholding of the constitutional and democratic principles including respect for human rights,” Price highlighted.

The State Department spokesperson clarified that the US did not support any specific political party whether it is the matter of Pakistan or any other country around the world.

“We support broader principles including the rule of law and equal justice under the law,” he added.

Ned Price also congratulated newly elected PM Shehbaz Shairf, who was voted into power by the National Assembly after Imran Khan was ousted through no-trust vote.

“We congratulated PM Shehbaz Sharif on his election by the Pakistani parliament and we look forward to working with him and his government,” he said.

Speaking about the bilateral ties between the two countries, the US State Department spokesperson said that for almost 75, years the relationship between US and Pakistan has been a vital one, we look forward to continuing that work with Pakistan’s government to promote peace and prosperity in Pakistan and the broader region.

Pakistan on Thursday thanked the United States for the message of felicitations on the election of Shehbaz Sharif as prime minister.

"The United States views a strong, prosperous, and democratic Pakistan as essential for the interests of both of our countries," Blinken added.