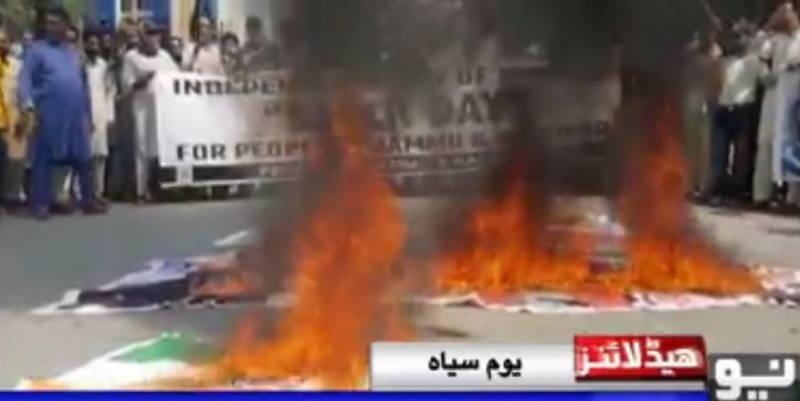 Srinagar (Web Desk): Kashmiris on both sides of Line of Control (LoC) and the around the world are observing India's independence day as a Black Day today (Saturday) to protest New Delhi’s illegal occupation of the valley.

According to Kashmir Media Service (KMS) the day is being marked with a complete shutdown in the Indian Illegally Occupied Jammu and Kashmir (IIOJ&K).

Call for the strike has been given by the veteran Hurriyat leader Syed Ali Geelani, the All Parties Hurriyat Conference (APHC), the Mirwaiz Umar Farooq-led Hurriyat forum and supported by almost all Hurriyat leaders and organizations.

The Kashmiris across the world will hold anti-India demonstration in from of Indian embassies to draw the world attention towards the Indian brutalities in the occupied territory.

In a message, Syed Ali Geelani said that a nation that resorts to usurpation and deprives others of their freedoms, loses every right to celebrate its freedom.

He asked people to observe complete shutdown on August 15 to keep alive the tradition of observing India’s Independence Day as a Black Day.

The APHC spokesman in a statement deplored that all basic human rights and civil liberties have been ruthlessly snatched and violated by India in the occupied territory.

Hurriyat forum led by Mirwaiz Umar Farooq in its statement in Srinagar said the Kashmiris would observe India’s Independence Day as Black Day to convey the message to the international community that New Delhi has usurped their inalienable right to self-determination by the dint of force.

The forum pointed out that India’s unlawful action of August 5, 2019 was against international law, UN charter and the 4th Geneva Convention.

The Jammu and Kashmir National Front (JKNF) has also appealed to the people to observe Indian Independence Day as Black Day.

In Azad Jammu and Kashmir (AJK), anti-India rallies and processions are being held in all small and major cities including Muzaffarabad and all other nine district headquarters of Mirpur, Kotli, Bagh, Bhimbher, Palandri, Rawalakot, Haveli, Jhelum Valley and Neelam valley.