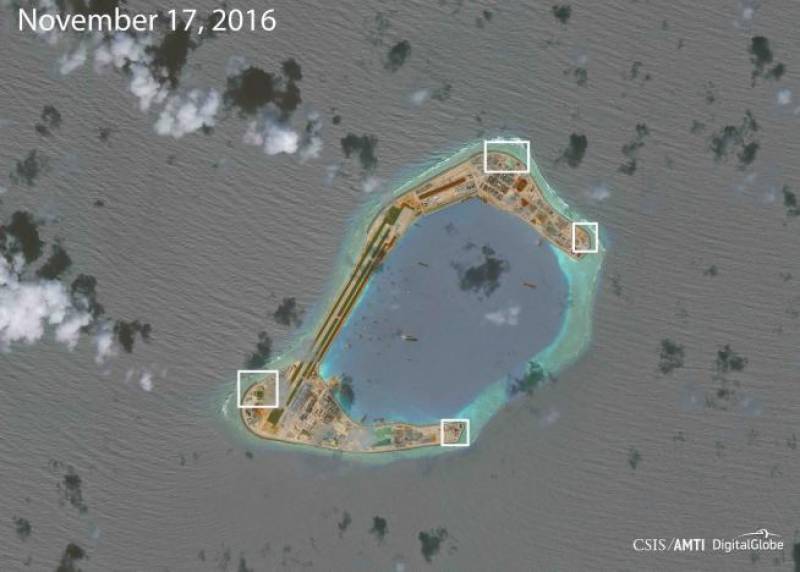 Washington (Reuters): A U.S. think tank reported, citing new satellite imagery that China seems to have installed weapons, including anti-missile and anti-aircraft systems, on its all seven of the artificial islands it has built in the South Chinese Sea.

The Asia Maritime Transparency Initiative (AMTI) at the Center for Strategic and International Studies said its findings come despite statements by the Chinese leadership that Beijing has no intention to militarize the islands in the strategic trade route, where territory is claimed by several countries.

AMTI stated that it had been tracing construction of hexagonal structures on Fiery Cross, Mischief and Subi reefs in the Spratly Islands since June and July. China has already built military length airstrips on these islands.

"It now seems that these structures are an evolution of point-defense fortifications already constructed at China’s smaller facilities on Gaven, Hughes, Johnson, and Cuarteron reefs," it said citing images taken in November and made available to Reuters.

"This model has gone through another evolution at (the) much-larger bases on Fiery Cross, Subi and Mischief reefs."

It said that Satellite images of Hughes and Gaven reefs displayed what appeared to be anti-aircraft guns and what were likely to be close-in weapons systems (CIWS) to protect against cruise missile strikes.

AMTI said covers had been installed on the towers at Fiery Cross, but the size of platforms on these and the covers suggested they concealed defense systems similar to those at the smaller reefs.

"These gun and probable CIWS emplacements show that Beijing is serious about defense of its artificial islands in case of an armed contingency in the South China Sea," it said.

"Among other things, they would be the last line of defense against cruise missiles launched by the United States or others against these soon-to-be-operational air bases."

Greg Poling director AMTI said AMTI had spent months trying to figure out what the purposes of the structures was.

"This is the first time that we're confident in saying they are anti-aircraft and CIWS emplacements. We did not know that they had systems this big and this advanced there," he told Reuters.

"This is militarization. The Chinese can argue that it's only for defensive purposes, but if you are building giant anti-aircraft gun and CIWS emplacements, it means that you are prepping for a future conflict.

The report also said that Chinese are keep saying they are not militarizing, but they could deploy fighter jets and surface-to-air missiles tomorrow if they wanted to. Now they have the entire infrastructure in place for these interlocking rings of defense and power projection. The report said the installations would likely back up a defensive umbrella provided by a future deployment of mobile surface-to-air missile (SAM) platforms like the HQ-9 system deployed to Woody Island in the Paracel Islands, farther to the north in the South China Sea.

It forecast that such a deployment could happen "at any time," noting a recent Fox News report that components for SAM systems have been spotted at the southeastern Chinese port of Jieyang, possibly destined for the South China Sea.

China has said military construction on the islands will be limited to necessary defensive requirements.

The United States has criticized what it called China's militarization of its maritime outposts and stressed the need for freedom of navigation by conducting periodic air and naval patrols near them that have angered Beijing.

U.S. President-elect Donald Trump, who takes office on Jan. 20, has also criticized Chinese behavior in the South China Sea while signaling he may adopt a tougher approach to China's assertive behavior in the region than President Barack Obama.

The State Department said it would not comment on intelligence matters, but spokesman John Kirby added, "We consistently call on China as well as other claimants to commit to peacefully managing and resolving disputes, to refrain from further land reclamation and construction of new facilities and the militarization of disputed features."