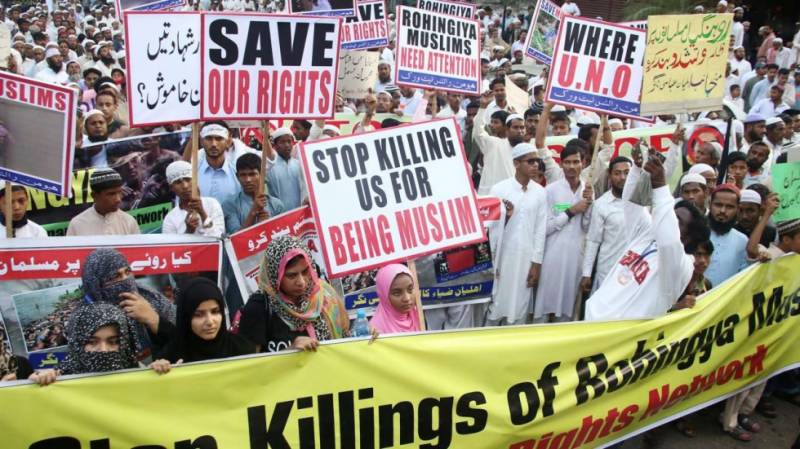 Rangoon (Reuters): A group of Rohingya Muslims that attacked Myanmar border guards in October is headed by people with links to Saudi Arabia and Pakistan, the International Crisis Group (ICG) said on Thursday, citing members of the group.

The coordinated attacks on October 9 killed nine policemen, and sparked a crackdown by security forces in Muslim-majority Rakhine State in northwest Myanmar.

At least 86 people have been killed, according to state media, and the UN has estimated 27,000 members of the largely stateless Rohingya minority have fled across the border to Bangladesh.

A group calling itself Harakah al-Yakin (HaY) claimed responsibility for the attacks in video statements and the Brussels-based ICG said it had interviewed four members of the group in Rakhine State and two outside Myanmar, as well as individuals in contact with members via messaging apps.

The Harakah al-Yakin, or Faith Movement, was formed after communal violence in 2012 in which more than 100 people were killed and about 140,000 displaced in Rakhine State, most of them Rohingya, the group said.

Rohingya who have fought in other conflicts, as well as Pakistanis or Afghans, gave clandestine training to villagers in northern Rakhine over two years ahead of the attacks, it said.

“It included weapons use, guerrilla tactics and, HaY members and trainees report, a particular focus on explosives and IEDs,” the group said, referring to improvised explosive devices.

It identified Harakah al-Yakin’s leader, who has appeared prominently in a series of nine videos posted online, as Ata Ullah, born in Karachi, Pakistan, to a Rohingya migrant father before moving as a child to Mecca in Saudi Arabia.

“Though not confirmed, there are indications he went to Pakistan and possibly elsewhere, and that he received practical training in modern guerrilla warfare,” the group said, noting that Ata Ullah was one of 20 Rohingya from Saudi Arabia leading the group’s operations in Rakhine State.