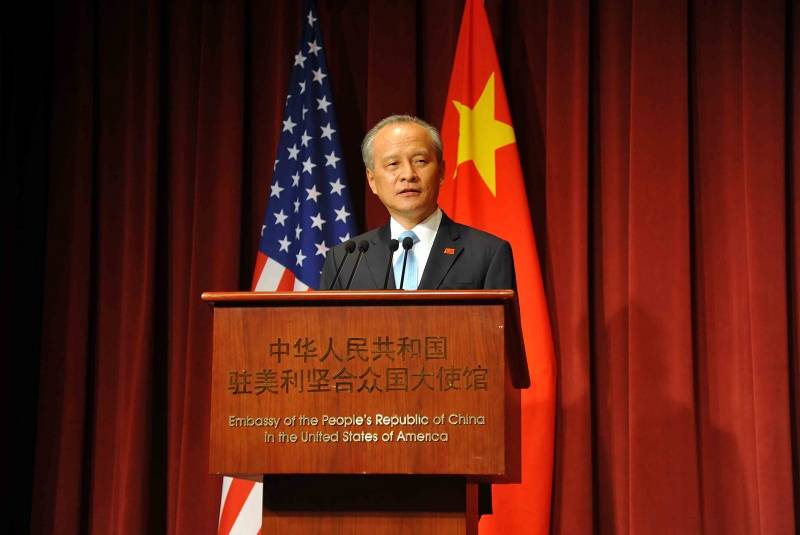 While speaking to executives of top U.S. companies, China's ambassador Cui Tiankai said China and the United States needed to work to strengthen their relationship.

Cui said, "The political foundation of China-U.S. relations should not be undermined. It should be preserved".

"And basic norms of international relations should be observed, not ignored, certainly not be seen as something you can trade off," he said. "And indeed, national sovereignty and territorial integrity are not bargaining chips. Absolutely not. I hope everybody would understand that."

He did not specifically mention Taiwan, or Trump's comments last weekend that the United States did not necessarily have to stick to its nearly four-decade policy of recognizing that Taiwan is part of "one China."

Cui's remarks were in line with recent protests from China's Foreign Ministry, which regards the "one China" principle as the "political basis" for U.S.-China ties..

China considers Taiwan independence a red line issue. Beijing regards Taiwan as a rebellious province and has never renounced the use of force to bring it under its control.

In an editorial it said, "It is hoped that peace in the Taiwan Straits won't be disrupted. But the Chinese mainland should display its resolution to recover Taiwan by force. Peace does not belong to cowards".

Trump, in an interview on "Fox News Sunday," suggested that the U.S. position on Taiwan could become part of his pledge to negotiate more favorable trade terms with China.

Trump's comments came after he prompted a diplomatic protest from China over his decision to accept a telephone call from Taiwan's president on December 2.

U.S. corporate executives are increasingly pessimistic about their business prospects in China in light of tough restrictions on foreign investment in the country's vast service sector, new cyber-security regulations that favor domestic technologies and weak enforcement of intellectual property protections.

Cui did not mention the autos case, but said: "China will ensure that there is a level playing field, for all companies, in China, both domestic and foreign."