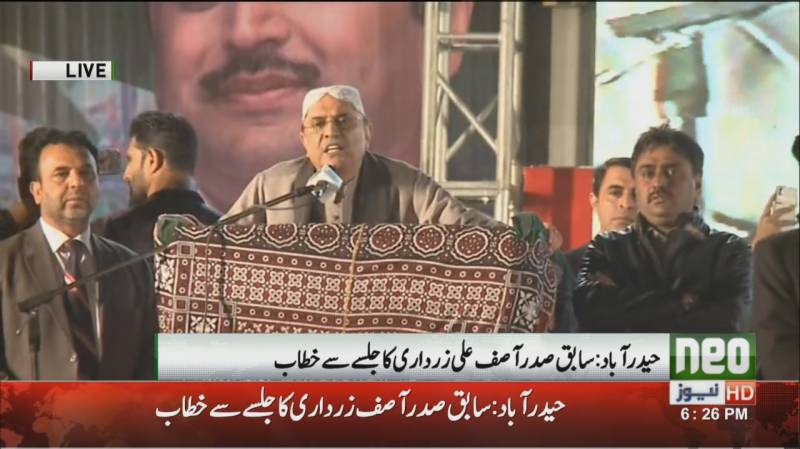 Hyderabad (Staff Report): Pakistan People's Party (PPP) co-chairman Asif Ali Zardari on Saturday said only parliament can make decisions for the nation rather than those with the service tenure of just three years.

Addressing a public gathering in Hyderabad, the former president said that all institutions should operate within their constitutional ambit.

He said that a large number of cases were pending in the courts which should be wrapped up first.

Lashing out at the Pakistan Tehreek-e-Insaf (PTI) government, Zardari said that those who promised to build five million houses, had instead caused 0.5 million people to lose their jobs in the name of the anti-encroachment campaign.

He said that the government was trying to close down BB cards but the PPP would not let them succeed.

Criticising government's first hundred-day plan, he said a lot could have been done in the first hundred days.

“We got rid of Musharraf in 100 days, we got Swat freed in 100 days,” the former president noted, recalling his party's tenure in the centre.

Referring to Prime Minister Imran Khan, he said that it is not necessary for a person to be good at cricket and politics at the same time.

"I don't know how to play cricket. I know politics and I can do that," Zardari said.

“I am a politician and that’s all I know. Politics is when Musharraf is sent home,” he added.

The former president suggested the government to provide opportunities to the local businessmen and facilitate stock exchange. “Only technology and experts should be invited from abroad,” he added.

Asif Ali Zardari said that the provision of drinking water to the masses is top priority of the PPP. ”We need to work today for our future and come up with new ways to generate water resources,” he asserted.