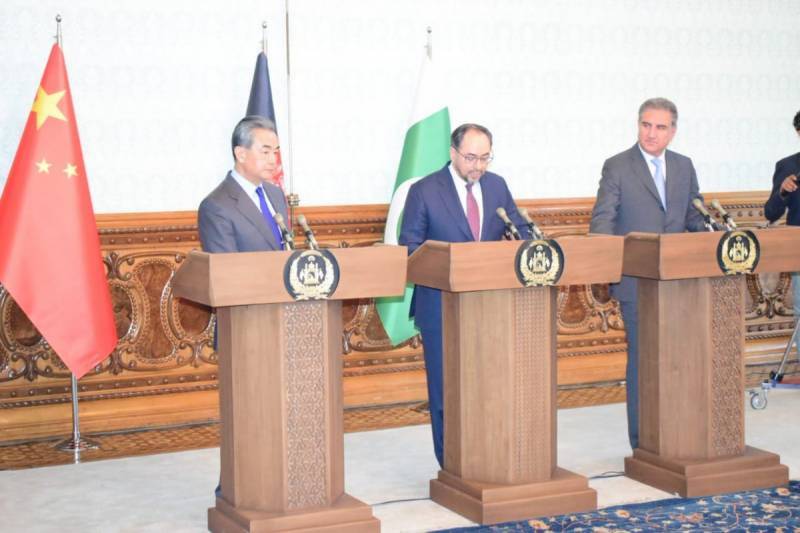 Kabul (Agencies): Pakistan, China and Afghanistan signed an anti-terrorism cooperation Memorandum of Understanding (Mo U) on Saturday during the ongoing second trilateral ministerial dialogue in Kabul.

The signing of the document was witnessed by Afghan President Ashraf Ghani.

Addressing a joint news conference along with his Chinese and Afghan counterparts, Foreign Minister Shah Mahmood Qureshi has stressed a joint strategy to eradicate the menace of terrorism from the region.

He said that only through collective efforts we can wipe out terrorism and achieve the objectives of peace and development.

He said Pakistan will extend cooperation to bring all the Afghan groups to the table of negotiations. He, however, said it is up to the Afghans themselves as to how they want to achieve the goal of peace.

“Pakistan condemns terrorism in all its forms and manifestations,” FM Qureshi stated adding, that he is visiting Kabul to bridge the trust deficit between the two countries.

In his remarks, Chinese Foreign Minister Wang Yi said both Afghanistan and Pakistan are friends of China and his country will extend every possible cooperation to build trust and confidence between the two countries.

China will also assist in establishing connectivity projects including a rail line between Peshawar-Kabul and Kandahar, Wang Yi said.

Afghanistan’s Foreign Minister Salahuddin Rabbani said Pakistan has an important role for peace in Afghanistan.  He said peace in his country is vital for peace and security of the entire region.

He noted that eradication of terrorism will pave the way for economic development and job creation.

Earlier, speaking at the opening session of the trilateral talk, Foreign Minister Shah Mahmood Qureshi said Pakistan, China and Afghanistan will have to collectively foil the designs of enemies of peace in the region.

He stressed the need for bolstering regional cooperation in diverse sectors.

Reaffirming commitment to eradication of terrorism, Qureshi said that better border management between Pakistan and Afghanistan and intelligence sharing will be greatly beneficial for both the countries.

He said Pakistan will continue to play facilitative role on Afghan reconciliation process.

“We will do everything to support the growing momentum towards reconciliation provided others play their due role and share responsibility and create an enabling environment towards that end, FM Qureshi added.

He said Pakistan has always supported dialogue process for peaceful resolution of Afghan conflict. “Our stance has now also been vindicated by the international community”, Qureshi further said.

In his remarks, Chinese Foreign Minister Wang Yi said that his country desires to make the Afghan reconciliation process successful. “We will play our role to reduce trust deficit between Pakistan and Afghanistan”, Wang Yi said.

The Chinese FM said his country also wants to further strengthen relations with Afghanistan and desires to make it part of CPEC. “We support an Afghan led and Afghan owned peace process, Wang Yi said.

Foreign Minister Shah Mahmood Qureshi is accompanied by Foreign Secretary Tehmina Janjua and other senior officials of the Foreign Office on his one-day official visit to Afghanistan.