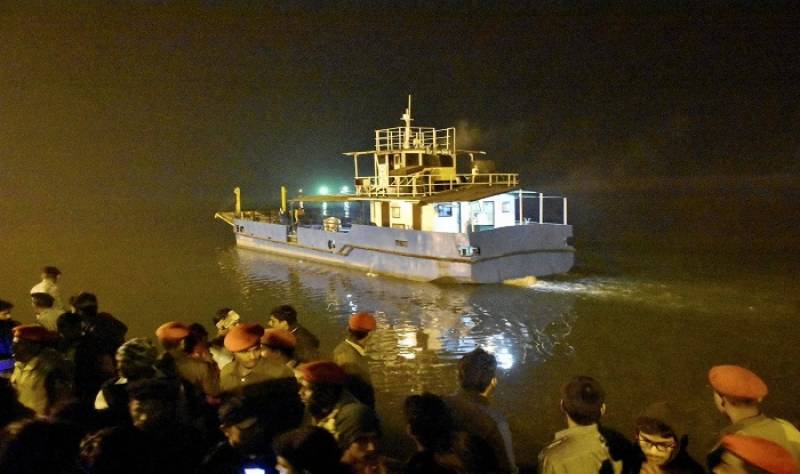 New Delhi (Online): At least 19 people died Saturday after an overloaded boat carrying some 40 people capsized in the Ganges River in eastern India.

Manu Maharaj, a senior police superintendent told media, “We can confirm that 19 people have died. Rescue operations are on to find those still missing."

According to Indian media, emergency workers started searching for survivors underwater as anxious family members waited on the shore.

The victims were travelling to take part in the Hindu religious festival of Makar Sakranti near Patna, the capital of Bihar state.

Thousands of devotees take a dip in the river -- considered sacred by Hindus -- on the occasion of Makar Sakranti which is also marked by kite-flying and other rituals.

Indian media reported the boat was packed beyond capacity with revelers attending an annual celebration organised by the state government.

Some passengers managed to swim to safety after the boat capsized but the exact number of those missing could not be ascertained due to the absence of a passenger list.

Senior officials were camping near the site of the accident to oversee the search and rescue operations, the Press Trust of India (PTI) news agency said.

State Chief Minister Nitish Kumar ordered an inquiry into the accident and announced compensation of 400,000 rupees ($5,900) for the families of the victims.

Boat accidents are common in the country, mainly because of overcrowding, poor maintenance, lax regulations and a lack of life jackets and other safety equipment on ferries.

Some 20 people died after a ferry capsized in a rain-swollen river in India's northeastern state of Assam in September 2015.

More than 100 people lost their lives in 2012 in Assam when a boat sank in the Brahmaputra River during a storm.