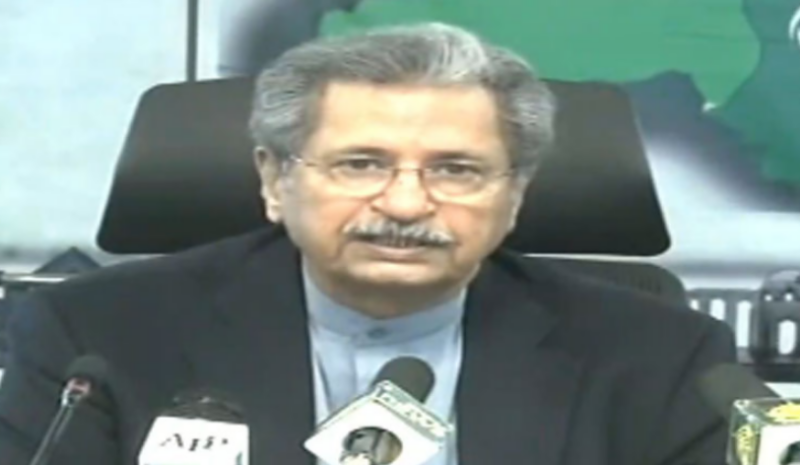 Islamabad (Web Desk): Federal Minister for Education Shafqat Mahmood on Friday announced that the educational institutions will resume classes 9-12 from January 18 while classes 1-8 will begin from February 1.

He was briefing the media after a high-level meeting at the National Command and Operations Centre (NCOC) to review the decision to reopen educational institutions amid the ongoing wave of Covid-19.

The meeting was also attended by federal and provincial health and education ministers.

Shafqat Mahmood said that it was decided during the meeting that the NCOC will review the coronavirus situation next week and adopt a smart approach under which there is a possibility to keep the schools shut in those cities where the infection rate is comparatively high.

He said the institutions of higher education will also reopen from February 1.

Shafqat Mahmood said it has also been decided that the students will not be promoted to the next class without examinations.

During the press conference, he also said that this year, students will not be promoted without examinations.

“COVID-19 has badly affected the education of our children over the last eight to nine months,” the minister said, adding that the government has tried to create a balance ensuring that the education activities continue whilst protecting the health of children.

On January 4, the education ministers on the advice of health experts had announced reopening of educational institutions in phases from January 18 which were closed on November 26.

Meanwhile, the Punjab government has assured the parents that it will ensure strict compliance of COVID-19 Standard Operating Procedures (SOPs) in schools.