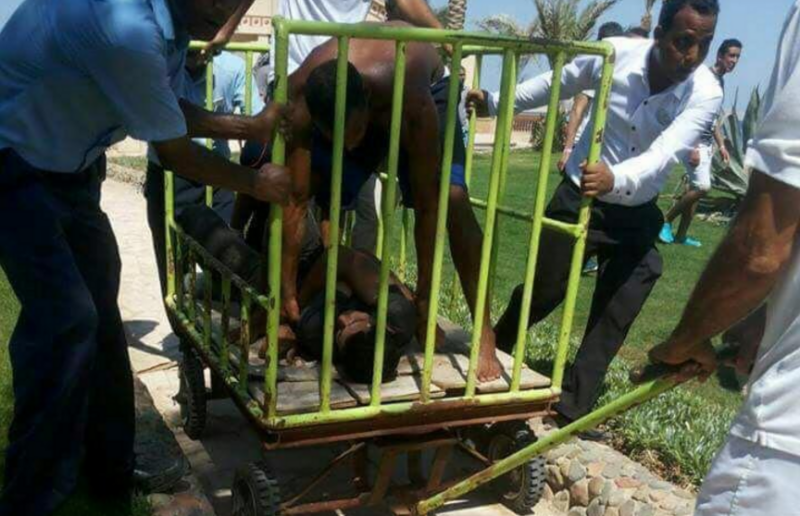 Cairo (Reuters): An Egyptian man stabbed two German tourists to death and wounded four others on Friday at a popular seaside vacation spot on the Red Sea, after apparently searching out foreigners to attack, officials and witnesses said.

The knifeman killed the two German women and wounded two other tourists at the Zahabia hotel in Hurghada, then swam to a neighboring beach to attack at least two more people at the Sunny Days El Palacio resort before being caught by staff and arrested, officials and security sources said.

It was the first major attack on foreign tourists since a similar assault on the same resort more than a year ago, and comes as Egypt struggles to revive a tourism industry hurt by security threats and years of political upheaval. "He had a knife with him and stabbed each of them three times in the chest. They died on the beach," the security manager at the El Palacio hotel, Saud Abdelaziz, told Reuters.

"He jumped a wall between the hotels and swam to the other beach."

Abdelaziz said two of the injured were Czech and two Armenian, but other officials said one of the women was Russian. They were being treated a local hospital. The Czech Foreign Ministry tweeted that one Czech woman had sustained a minor leg injury.

The German Foreign Ministry said it had no definite information, but could not rule out that German citizens were among the victims. The German Embassy in Cairo was working closely with the authorities, a ministry spokesman said.

A security personnel detains the man who stabbed two German tourists to death and wounded four others during an attack at the Zahabia hotel resort in Hurghada, south of the capital Cairo, Egypt, July 14, 2017.Mohamed Aly

The attacker's motive was still under investigation, the Interior Ministry said.

"He was looking for foreigners and he didn't want any Egyptians," said one member of staff at the Zahabia Hotel.

Egypt is fighting Islamist insurgents in the Sinai Peninsula, where they mainly target security forces, but militants have also attacked tourist targets in the past, as well as Coptic Christians and churches.

Hurghada, some 400 km (250 miles) south of the capital Cairo, is one of Egypt's most popular vacation spots on the Red Sea.

In January 2016, two assailants armed with a gun, a knife and a suicide belt landed on the beach of a hotel in Hurghada, and wounded two foreign tourists.

Egypt has been hoping that investments in airport security and the cheaper Egyptian pound will bring tourist visits to its beaches and ancient sites back up to levels seen before its 2011 uprising.

The industry, a crucial source of hard currency, has struggled since then with years of political turmoil and mass protests, as well as the fallout from the crash of a jet taking Russian holidaymakers home from the Egyptian Red Sea resort of Sharm el-Sheikh in October 2015, in which 224 people died. Islamic State said it had brought the plane down with a bomb.

Friday's attack came on a day that five policemen were killed by gunmen on a motorbike who ambushed their car just south of Cairo.