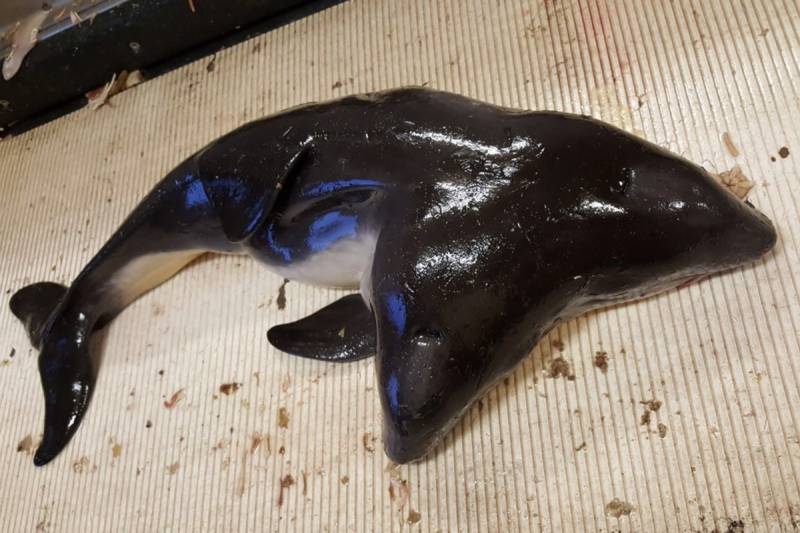 Lahore (Web Desk): The newborn male harbour porpoises were caught as accidental bycatch and thrown back into the North Sea by Dutch fishermen fearing it would be illegal to keep them.

The first known case of a two-headed harbour porpoise was documented last month when Dutch fishermen in the North Sea accidentally caught the anomalous creature as bycatch in a beamtrawl net.

Fearing it would be illegal to keep the deceased marine mammal, they threw it back into the ocean, but not before taking photos of their bizarre find and alerting researchers.

While case studies of conjoined twins have been studied in humans, reptiles, and domestic animals, they are rarely seen in wild mammals. In fact, before this find, only nine other instances of two-headed cetaceans of any kind had ever been reliably documented. A study recently published by the online Journal of the Natural History Museum Rotterdam contextualized the rarity of the find.

"Descriptions of conjoined twins in whales and dolphins are extremely rare," Erwin Kompanje, from the National History Museum Rotterdam, noted in his study. "We were aware of only nine [other] published cases."

Though researchers lamented not being able to physically examine the porpoise, they could glean details from the fisher's photos.

Scientists know definitively the porpoise was both a newborn and a male.

The dorsal fins were not yet erect, the rostrums (or top of its heads) still contained hairs, and it still contained an umbilical opening, indicating the porpoise died shortly after birth. The tale had also not stiffened, a necessary development that porpoises need in order to swim.

On average, porpoises produce one offspring every one to two years, and even cases of twins are extremely rare. Nearly 700,000 porpoises can be found around the world, with 345,000 residing in the North Sea, though never before with two heads (as far as the scientists could determine).

The International Union for the Conservation of Nature states thatincidental catch is the biggest threat facing porpoises. As a result, the European Union has adopted measures to monitor the effect nets and trawls have on populations.

Symmetrical conjoined twins, such as this porpoise, are thought to result when two separate embryos fuse together or a zygote only partially splits.

Kompanje noted in his study, however, that a full understanding of what causes conjoined twins remains an enigma.

As US warned North Korea, its 'armada' was headed toward Australia