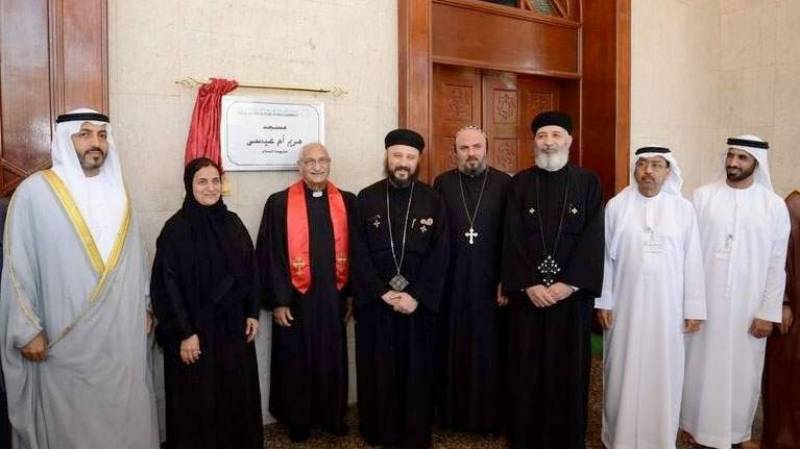 Abu Dhabi (Web Desk): His Highness Sheikh Mohamed bin Zayed Al Nahyan, Crown Prince of Abu Dhabi and Deputy Supreme Commander of the UAE Armed Forces, has ordered the renaming of the Sheikh Mohamed bin Zayed Mosque in Al Mushrif area to 'Mariam, Mother of Issa'. The move aims to promote the social connections between the followers of different religions and strengthen the common characteristics between them.

Sheikha Lubna Al Qasimi, Minister of State for Tolerance, expressed appreciation for the move, saying it reflected Sheikh Mohamed's "pure humanity and portrays a bright image of the real tolerance and coexistence in the UAE".

Sheikha Lubna Al Qasimi, Minister of State for Tolerance, expressed appreciation for the move, saying it reflected Sheikh Mohamed's "pure humanity and portrays a bright image of the real tolerance and coexistence in the UAE".

She said renaming the mosque as 'Mariam, Mother of Issa' has tolerant qualities, especially as this event coincides with the Zayed Humanitarian Day, which was marked on Wednesday (Ramadan 19).

The mosque, she noted, is located in a place that reflects the values of tolerance, brotherhood and coexistence, "as the location includes many civilised places of worship". This reflects the mission of tolerance of the UAE's leadership, government and people.

Sheikha Lubna praised the numerous humanitarian initiatives of Sheikh Mohamed and his desire to promote the values of tolerance between different nationalities and cultures.

Dr Mohammed Matar Al Kaabi, Chairman of the General Authority of Islamic Affairs and Endowments, expressed his appreciation for the move. He said it highlights that the wise leadership was always keen to promote tolerance and coexistence for all people living in the UAE.

"This journey was completed by the President, His Highness Sheikh Khalifa bin Zayed Al Nahyan, and Sheikh Mohamed as there are people from over 200 nationalities currently living in the UAE. They enjoy security, peace and coexistence, as our holy religion urges us to follow justice, respect others and cooperate in giving with other people," he added. - Wam

We want giving to be a culture: Mohammed

His Highness Sheikh Mohammed bin Rashid Al Maktoum, Vice-President and Prime Minister of the UAE and Ruler of Dubai, took to Twitter on Wednesday to remember the late Sheikh Zayed bin Sultan Al Nahyan. In a series of tweets on Zayed Humanitarian Day - which was marked on Wednesday (Ramadan 19) - Sheikh Mohammed called Sheikh Zayed "the founder and pioneer of giving and goodness".

"I would like to tell the Emirati people that we are all sons of Sheikh Zayed the giver and the UAE is the country of giving ... We want giving to be a culture, a habit, a legacy and a plant for the next generation."

"Humanitarian work has been connected to Sheikh Zayed because it was part of his nature. This is how I knew him ... and we all learned from him."