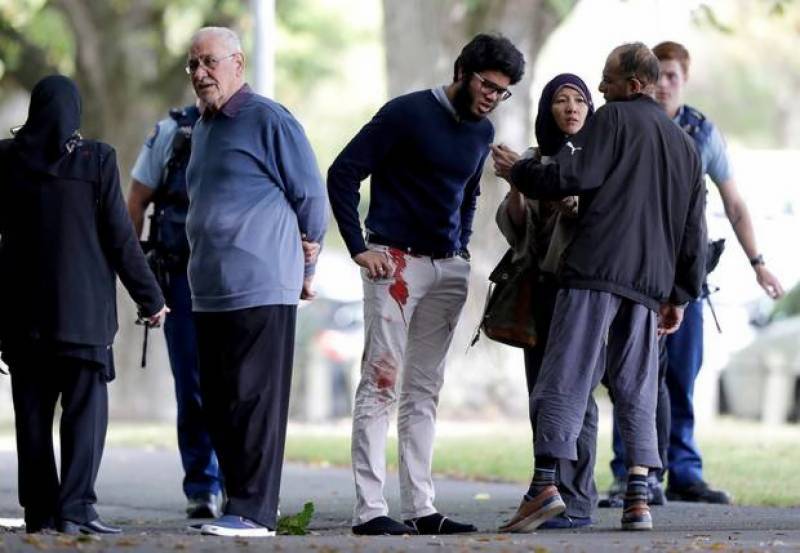 “This is one of New Zealand’s darkest days,” said Prime Minister Jacinda Ardern, who gave the preliminary death toll late Friday. At least 20 more people were seriously injured, she said.

"It is clear that this can now only be described as a terrorist attack," she said.

A man who claimed responsibility for the shootings left a 74-page anti-migrant manifesto in which he explained who he was and his motives.

The man posted video of part of the attack on social media. One portion of video shows the man driving to a mosque and pulling military-style weapons — covered with writings in white — from the trunk of his car before walking up to the mosque’s entrance.

Three men and one woman are in custody, Police Commissioner Mike Bush said Friday afternoon. But, he added, “we are not assuming this is contained.”

Police are mobilizing "every national police resource" to "keep people safe," he said.

The police commissioner issued a plea directed at New Zealand Muslims: "I want to ask anyone that was thinking of going to a mosque anywhere in New Zealand today, not to go, to close your doors until you hear from us again."

Many Muslims would have been going to mosques for Friday prayers.

Police rushed to the central part of the city after reports of gunfire at 1:40 p.m. local time, the New Zealand Police said on its Twitter account. Ten people were killed at a mosque near Hagley Park and 30 were killed at the nearby Linwood Mosque, the prime minister said.

Some of those targeted may have been migrants, Ardern said, or refugees.

“They are us,” she said. “The person who has perpetuated the violence against us is not.”

Witness Len Peneha said he saw a man dressed in black enter the Masjid al Noor mosque and then heard dozens of shots, followed by people running from the mosque in terror.

Peneha, who has lived next door to the mosque for about five years, said the gunman ran out of the mosque, dropped what appeared to be a semiautomatic weapon in Peneha's driveway, and continued running.

Peneha said he went into the mosque to try to help.

"I saw dead people everywhere,” he said. “There were three in the hallway, at the door leading into the mosque, and people inside the mosque.

"It's unbelievable nutty. I don't understand how anyone could do this to these people, to anyone. It's ridiculous."

Ahmed al Mahmoud told reporters he was inside the mosque when a gunman wearing military-style clothing, including a helmet, sprayed the interior with gunfire. Al Mahmoud, whose hand was bleeding, said in a video on a Christchurch news site that he and others escaped by breaking a window in a door.

The Linwood Masjid, a few miles away, was also attacked.

Mushfiqur Rahim, a member of Bangladesh’s cricket team, tweeted that the team, in the city for a competition, had been inside one of the mosques during the attack.

New Zealand cricket team officials confirmed "that both teams and support staff groups are safe and accounted for."

Mass shootings are extremely rare in New Zealand, with the most well-known the Aramoana massacre in 1990, when a man gunned down 13 people in a tiny seaside village. The worst massacre before that was in 1941, when a man killed six police officers.

Bush, the police commissioner, spoke of the extraordinary circumstances.

"We are currently dealing with an unprecedented situation in New Zealand,” he said. “It's very grave, it's very serious."

He said he had seen the video footage from social media. “It’s very disturbing. It shouldn’t be in the public domain. And we’re doing everything we can to remove it.”

Facebook Australia-New Zealand policy director Mia Garlick said the videos had been taken down, according to the New Zealand Herald newspaper.

"New Zealand Police alerted us to a video on Facebook shortly after the livestream commenced and we quickly removed both the shooter's Facebook and Instagram accounts and the video," she said.

Australian Prime Minister Scott Morrison confirmed that one of the four people taken into custody in the mosque shootings is an Australian.

The man who claimed responsibility for the shootings said in his manifesto that he was a 28-year-old white Australian who came to New Zealand only to plan and train for the attack. Morrison said Friday that Australian authorities were assisting with the investigation.