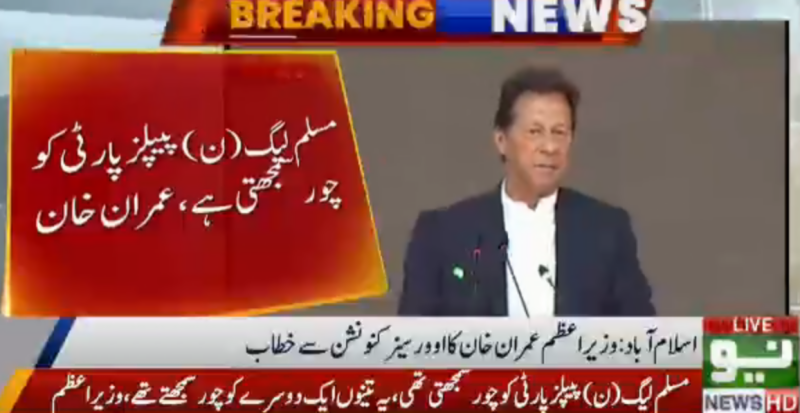 Islamabad (Web Desk): Prime Minister Imran Khan on Tuesday said that he was 'thankful' to the Opposition for filing a no-trust motion against as it has strengthened the Pakistan Tehreek-e-Insaf (PTI).

Addressing the overseas convention in Islamabad, the premier said the entire nation stands with him rather than supporting the Opposition parties.

Imran Khan quipped that he was thankful to them for filing a no-trust motion against him that had "lifted his party".

PM Imran said that this is a difficult time and people are facing difficulties due to inflation but they (the opposition) misunderstood and thought people had forgotten about their corruption and they fell into the captain's trap.

He said that the opposition would "fail" not only in the no-confidence resolution but also in the upcoming general elections.

Criticising PML-N and PPP leaders, Imran Khan said that they were afraid of standing against the West and losing their looted money.

"100 drone strikes had been conducted in Pakistan during the governments of Nawaz Sharif and Zardari and PTI leaders had staged sit-ins to protest but "they had no shame," PM Imran said.

He also challenged top opposition parties, economists, and even media organisations, to debate on PTI’s performance in the last 3.5 years, saying that nobody served Pakistan like we did.

Appreciating overseas Pakistani for sending record remittances, PM Imran said he is aware of the problems being faced by the expats and his government is working to create more ease for them.

"Overseas community is precious asset of the country, and state acknowledges their services for the progress and development of Pakistan".

The reiterated PTI government's commitment to facilitate overseas community and pave way for their participation in national politics.

He expressed hope that the United Nations General Assembly (UNGA) will pass a resolution against rising incidents of Islamophobia in view of Pakistan's efforts.

On Kashmir issue, PM Imran said that said the government will continue its efforts to highlight Kashmir issue at all national fora.

He reiterated Pakistan's resolve to provide all out support to Kashmiris in achieving their Right to Self Determination.

Earlier, in his remarks, Minister for Information and Broadcasting Fawad Chaudhary reiterated government's resolve to safeguard rights of overseas Pakistanis.

He expressed the confidence that opposition's move against the premier will not succeed as nation has full confidence in Minister Imran Khan's dynamic leadership.

"Imran Khan is a symbol of pride for Pakistan, who always struggled for national interest, contrary to the opposition's leaders who put the country in crisis to save their personal interests," Fawad Chaudhry said.

Acknowledging the role of overseas Pakistanis for development of the country, the minister warned that Pakistan may become bankrupt without active role of the overseas.