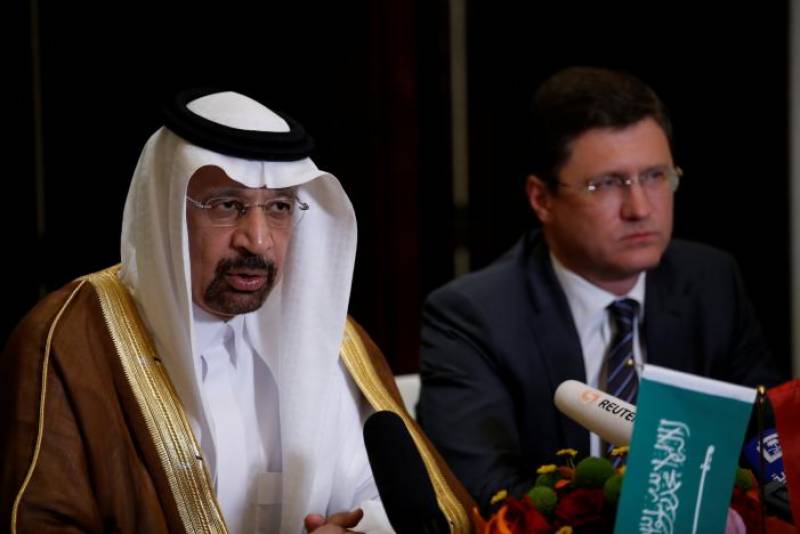 Beijing (Reuters): The world's two top oil producers, Saudi Arabia and Russia agreed on Monday to extend oil output cuts for a further nine months until March 2018 in a bid to erode a global crude glut, pushing up prices.

The timing of the announcement ahead of OPEC's next official meeting on May 25 and the statement's strong wording surprised markets, and the move will go a long way to ensure that other OPEC members and other producers who participated in the initial round of cuts fall into line.

In a joint statement that followed an earlier meeting, Saudi energy minister Khalid al-Falih and his Russian counterpart Alexander Novak said they had agreed to prolong an existing deal by another nine months until March 2018.

The ministers pledged "to do whatever it takes" to reduce global inventories to their five-year average and expressed optimism they will secure support from producers beyond those in the current deal, the statement said.

"There has been a marked reduction to the inventories, but we're not where we want to be in reaching the five-year average," said Falih at a briefing in Beijing alongside Novak.

"We've come to conclusion that the agreement needs to be extended."

Under the current agreement that started on Jan. 1, the Organization of the Petroleum Exporting Countries (OPEC), and other producers including Russia pledged to cut output by almost 1.8 million barrels per day (bpd) during the first half of the year.

Saudi, the defacto leader of OPEC, and Russia, the world's biggest producer, together control a fifth of global supplies. While it was broadly expected that OPEC and Russia would agree to extend the cut, the timing and wording of the statement sent crude prices up more than 1.5 percent in Asian trading.[O/R]

"I think OPEC and Russia recognize that in order to get the market back on their side they will need 'shock and awe' tactics where they need to go above and beyond a simple extension of the deal," said Virendra Chauhan, Singapore-based analyst at Energy Aspects.

"The market will also be looking at export cuts and not just production cuts, which is what is required to rebalance the market."

Major producers had been forced to consider lengthening the cuts as crude futures LCOc1CLc1 have languished around $50 per barrel as markets remain well supplied even after the current deal. An OPEC source familiar with the market situation told Reuters earlier on Monday that oil inventories in floating storage have declined by one-third since the start of the year.

Russia and Saudi Arabia together control around 20 million bpd in daily output.