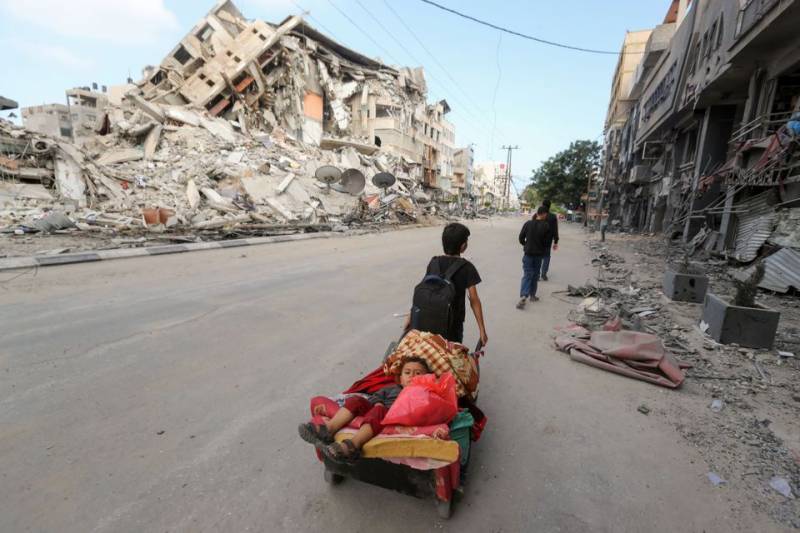 Jerusalem (Web Desk): Israeli fighter jets on Saturday continued to pound central Gaza with bombs, as the death toll of the Palestinians reached 132 including 31 children.

Despite intensifying diplomatic efforts to ease five days of fighting between Israel and Palestinians in Gaza, Israel’s air force struck several sites in the strip overnight, while rockets again tore towards the Jewish state.

Palestinian medics said at least four people were killed in one of several airstrikes in northern Gaza. Residents said Israeli naval boats fired shells from the Mediterranean though none may have hit the strip.

With no sign of an end to the fighting, casualties spread further afield, with Palestinians reporting 11 killed in the occupied West Bank amid clashes between protesters and Israeli security forces.

Hamas said a woman and a boy were among four people killed in an Israeli air strike that hit a home belonging to the Abu Hattab family in Gaza City's Beach refugee camp.

Among eight dead in Israel were a soldier patrolling the Gaza border and six civilians, Israeli authorities said.

Cross-border hostilities between Israel and Palestinian fighters in Gaza have been accompanied by violence in mixed communities of Jews and Arabs in Israel, prompting Israel’s president to warn of civil war.