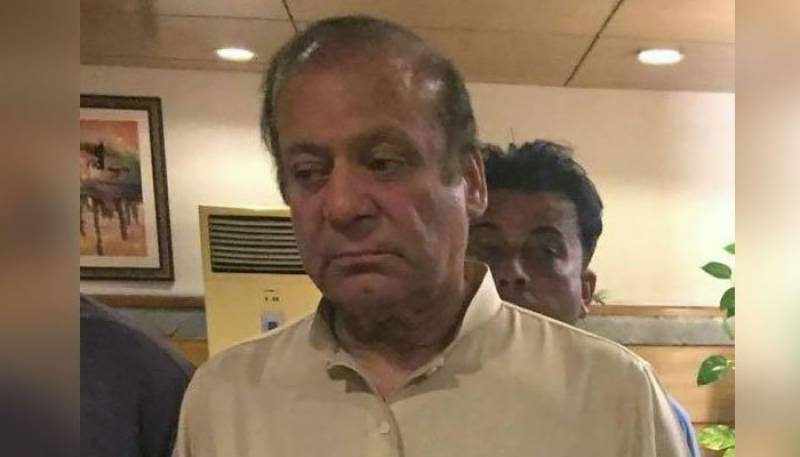 The court will resume hearing on the petition on Saturday.

The court dismissed the NAB and federal government's stance on the matter, adjourning the hearing until Saturday.

Earlier during the hearing, the federal government requested the court to maintain its condition of seeking a security bond from former prime minister Nawaz Sharif.

Appearing on behalf of the federal government, Additional Attorney General (AAG) Ishtiaq A Khan objected to the maintainability of the petition and requested that the petition be dismissed for being “non-maintainable”.

He contended that the former PM should approach the Islamabad High Court (IHC) instead for removal of his name from the ECL, as the federal government had placed his name on the list and the court lacked the jurisdiction to entertain the plea.

The government in its 45-page reply opposed the removal of Nawaz’s name from ECL without a security bond. It argued that Nawaz Sharif is convicted which is why he should not be allowed to leave the country without submitting a security bond.

Meanwhile, NAB also submitted its four-page reply to the court. Following the submission of the response, the court took a recess for an hour to allow the petitioner's counsel to read the responses.

PML-N’s counsel Amjad Pervez stated that the LHC could hear the petition as the NAB was a federal institution. He argued that the condition of furnishing Rs7.5 billion surety bonds was not based on any provision of law.

The counsel added that the government’s condition carried no legal standing as the petitioner had been granted bail in Chaudhry Sugar Mills case by the LHC and his sentence in Al-Azizia reference had been suspended by the IHC. He contended that Nawaz’s name was placed on the ECL in the wake of pending cases against him.

Pervez pointed out that the former prime minister had sent an application to the interior ministry for removal of his name from the ECL but the federal government issued the impugned order on Nov 13, allowing Nawaz to proceed abroad for treatment only after furnishing indemnity bond.

The PML-N’s counsel further said that Nawaz Sharif had the fundamental rights under Article 4 & 15 of the Constitution to move freely.

The court then asked the attorney general to tell whether the fine imposed by the government was part of the accountability court verdict.

The additional attorney general told the court that the federal government had sought surety bond equivalent to the fine imposed by the Islamabad accountability court on Nawaz. The law officer added that the PML-N leader’s sentence was only suspended in Al-Azizia reference and not set aside.

The bench observed that the IHC apparently suspended the sentence of the petitioner and not the fine. Justifying the government’s move to seek surety bond, he argued that if a person allowed to travel abroad did not come back, the federal government would be held responsible, as had happened in Pervez Musharraf case.

“Does the ECL ordinance give the Centre authority to give permission for a one-time visit abroad?” asked the court.

To this, PML-N’s counsel said the impugned order of November 13 was not based on any provisions of Exit from Pakistan (Control) Ordinance 1981 and Exit from Pakistan (Control) Rules 2010, empowering the federal government to impose extra conditions for his one-time permission to travel abroad especially after he had been granted bail by two different high courts. He added that the former PM was seriously ill and the medical board had suggested his treatment abroad.

Amjad said the courts were there to take action if the petitioner violated their orders of bail and suspension. The government has no role in the whole matter, he added.

When asked whether the impugned order of the government for the indemnity bond was a result of any consensus or whether the petitioner had been placed on the ECL on the recommendation of Lahore or Islamabad office of the NAB. He also sought time to file para-wise comments to the petition, which the bench duly allowed.

The bench also asked the law officer to assist it on a legal point as to whether the government had the power to put any condition for removing name from the ECL if there was an order by the court.

After declaring the plea as maintainable, the court initially summoned lawyers from both sides to present arguments on the merits of the petition on Monday. However, upon request from PML-N's lawyers, the bench fixed the next hearing of the petition for 11:30am on Saturday.

On Thursday, the PML-N filed a petition in the LHC to remove former premier Nawaz Sharif’s name from the ECL.

Addressing a press conference on Thursday, PML-N President Shehbaz Sharif had said that the government’s demand to submit indemnity bonds to secure permission for the party supremo to travel abroad was, in fact, demanding "ransom" and the decision was not acceptable to his party in any condition.