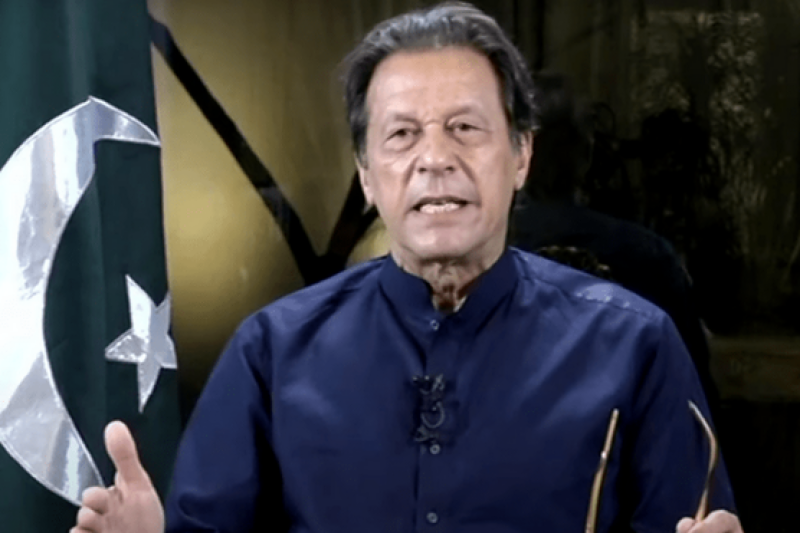 Lahore (Web Desk): Pakistan Tehreek-e-Insaf (PTI) Chairman Imran Khan on Tuesday said that the only solution to avert the looming economic crisis in the country is free and fair elections.

Addressing the participants of the long march at Sarai Alamgir via video link from Lahore, the PTI chief accused the incumbent government of destroying the country's economy, claiming that the ‘economy is on verge of default amid rising default risk

The former prime minister said he was raising the question before the "handlers" of the incumbent government that "who was responsible for the economic crisis in Pakistan today".

Khan said that six months back he had warned the “handlers” that the conspiracy to bring PML-N into power would cause losses.

"Shehbaz won’t be affected if our national security is compromised. He goes on private tours on the government’s money,” Imran claimed, expressing his fears of the country heading towards default.

The former premier said if people thought the government could still solve the economical issue “then I want to put this question in front of you that who brought Pakistan to this stage in the first place”.

While criticising the Election Commission of Pakistan (ECP), Imran Khan alleged that it was working on an agenda against the PTI.

He said that the electoral watchdog was not only close to the Pakistan Muslim League-Nawaz (PML-N) but also the handlers.

"Chief Election Commissioner Sikandar Sultan Raja passed decisions against us eight times and all of them were rejected by the judiciary."

Referring to the ECP's verdicts against the party, he asked: "How could he pass judgments on us when he has been repeatedly giving decisions against us."

The PTI chief, once again, called on the Chief Justice of Pakistan (CJP), saying that the nation was looking to him for justice in “three landmark cases”: Arshad Sharif’s murder, Azam Swati’s custodial torture, and the Wazirabad FIR issue.

“CJP, we are looking towards you because we don’t have hope from anywhere else,” Khan said, adding that it was high time the courts became assertive and stood with the people of Pakistan.

He criticised the coalition government saying that that PTI supporters were beaten up and arrested after the march on May 25.

"Did you see any tear gas or sticks when Maryam Nawaz and Bilawal held protests? They marched for days but we never created any obstacle neither did we arrest them," Qureshi said.

Meanwhile, addressing a public gathering in Chiniot, PTI general secretary Asad Umar has said that neither bullets nor threats can scare the supporters of party chairman Imran Khan.

"If you think we will surrender, you are wrong. And if you think bullets will scare us, here we are," he said.