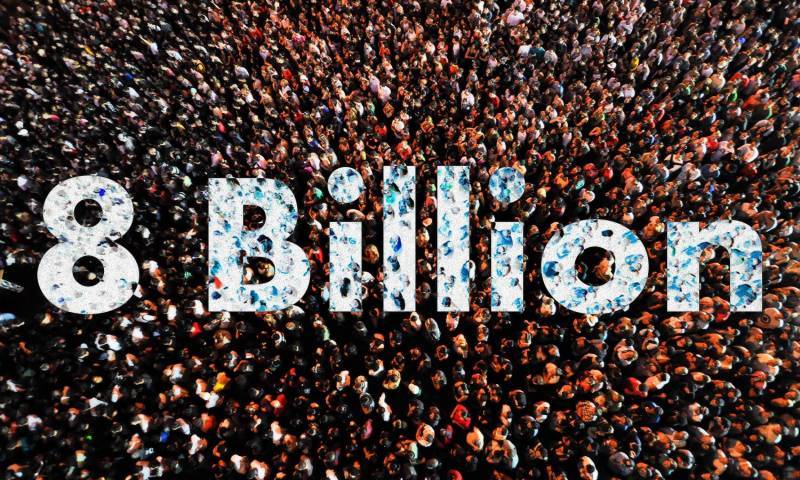 India is projected to surpass China as the world’s most populous country in 2023.

“This year’s World Population Day falls during a milestone year, when we anticipate the birth of the Earth’s eight billionth inhabitant. This is an occasion to celebrate our diversity, recognize our common humanity, and marvel at advancements in health that have extended lifespans and dramatically reduced maternal and child mortality rates,” said UN Secretary-General António Guterres.

“At the same time, it is a reminder of our shared responsibility to care for our planet and a moment to reflect on where we still fall short of our commitments to one another,” he added.

The global population is growing at its slowest rate since 1950, having fallen under 1 per cent in 2020. The latest projections by the United Nations suggest that the world’s population could grow to around 8.5 billion in 2030 and 9.7 billion in 2050. It is projected to reach a peak of around 10.4 billion people during the 2080s and to remain at that level until 2100.

World Population Prospects 2022 also states that fertility has fallen markedly in recent decades for many countries. Today, two-thirds of the global population lives in a country or area where lifetime fertility is below 2.1 births per woman, roughly the level required for zero growth in the long run for a population with low mortality. The populations of 61 countries or areas are projected to decrease by 1 per cent or more between 2022 and 2050, owing to sustained low levels of fertility and, in some cases, elevated rates of emigration.

More than half of the projected increase in the global population up to 2050 will be concentrated in eight countries: the Democratic Republic of the Congo, Egypt, Ethiopia, India, Nigeria, Pakistan, the Philippines and the United Republic of Tanzania. Countries of sub-Saharan Africa are expected to contribute more than half of the increase anticipated through 2050.

“The relationship between population growth and sustainable development is complex and multidimensional” said Liu Zhenmin, UN Under-Secretary-General for Economic and Social Affairs.

In most countries of sub-Saharan Africa, as well as in parts of Asia and Latin America and the Caribbean, the share of population at working age (between 25 and 64 years) has been increasing thanks to recent reductions in fertility. This shift in the age distribution provides a time-bound opportunity for accelerated economic growth per capita, known as the “demographic dividend”. To maximize the potential benefits of a favourable age distribution, countries should invest in the further development of their human capital by ensuring access to health care and quality education at all ages and by promoting opportunities for productive employment and decent work.

The share of global population at ages 65 and above is projected to rise from 10 per cent in 2022 to 16 per cent in 2050. At that point, it is expected that the number of persons aged 65 years or over worldwide will be more than twice the number of children under age 5 and about the same as the number under age 12. Countries with ageing populations should take steps to adapt public programmes to the growing numbers of older persons, including by establishing universal health care and long-term care systems and by improving the sustainability of social security and pension systems.

Global life expectancy at birth reached 72.8 years in 2019, an improvement of almost 9 years since 1990. Further reductions in mortality are projected to result in an average global longevity of around 77.2 years in 2050. Yet in 2021, life expectancy for the least developed countries lagged 7 years behind the global average.

The COVID-19 pandemic has affected all three components of population change. Global life expectancy at birth fell to 71.0 years in 2021. In some countries, successive waves of the pandemic may have produced short-term reductions in numbers of pregnancies and births, while for many other countries, there is little evidence of an impact on fertility levels or trends. The pandemic severely restricted all forms of human mobility, including international migration.