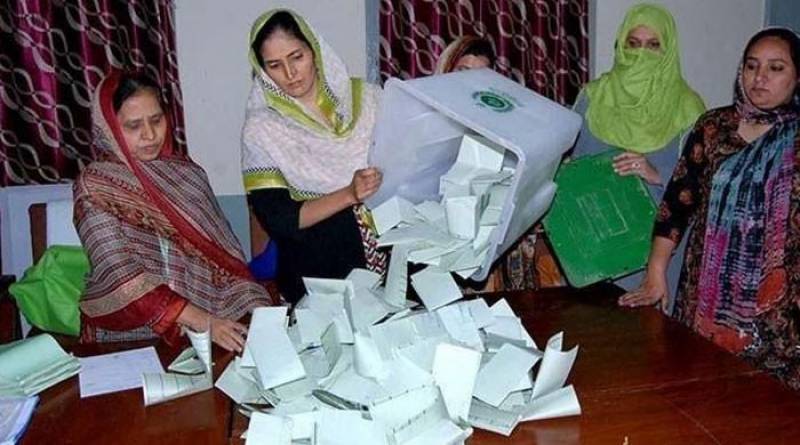 Lahore (Staff Report/Agencies): Unofficial and unverified results show the Pakistan Tehreek-e-Insaf (PTI) and the Pakistan Muslim League-Nawaz (PML-N) secured four seats of the National Assembly each in the by-elections held on Sunday across the the country for 35 national and provincial assemblies’ seats.

The Pakistan Muslim League-Quaid-e-Azam (PML-Q) managed to bag two seats that were vacated by Chaudhry Pervez Elahi, while the Muttahida Majlis-e-Amal (MMA) secured the NA-35 constituency in Bannu.

NA-60: PTI’s Rashid Shafique is leading with 36,035 followed by PML-N candidate Malik Sajjad Khan who has secured 35,792 votes so far.

In the by-elections on 24 provincial assembly seats – 11 in Punjab, nine in Khyber Pakhtunkhwa and two each in Sindh and Balochistan – the PTI was leading in nine constituencies, while the PML-N was ahead in six constituencies.

In Sindh by-election were held on two provincial assembly seats, PS-30 and PS-87. The PS-30 Khairpur seat was secured by PPP’s Syed Ahmad Raza Shah Jilani by defeating Waliur Rehman of the Grand Democratic Alliance (GDA) and others.

As per unofficial results, Akbar Mengal, who was fielded by Balochistan National Party-Mengal and Jamiat Ulema Islam-Fazl jointly, is leading in PB-40-Khuzdar, till filing of this report.

In PB-36 Mastung, former Balochistan chief minister Nawab Aslam Khan Raisani, an independent candidate, was leading with results of around 20 polling stations yet to come.

By-polls were held at 11 provincial assembly seats in Punjab. The PML-N won five and the PTI bagged four, whereas two independent candidates won the other two seats, unofficial results said.

Of the nine provincial assembly seats, where by-elections were held, the PTI is leading with five seats, followed by the Awami National Party (ANP) with three seats and the PML-N in Swat (PK-3) constituency.

Polling began at 8:00 am (PST) on Sunday morning and continued till 5:00 pm (PST) without any break, under the supervision of Pakistan Army personnel.

Over 100 candidates took part in elections for 35 national and provincial assembly seats, according to the Election Commission of Pakistan (ECP).

Polling for the by-elections on thirty five constituencies of the National and Provincial Assemblies across the country ended at 5pm.