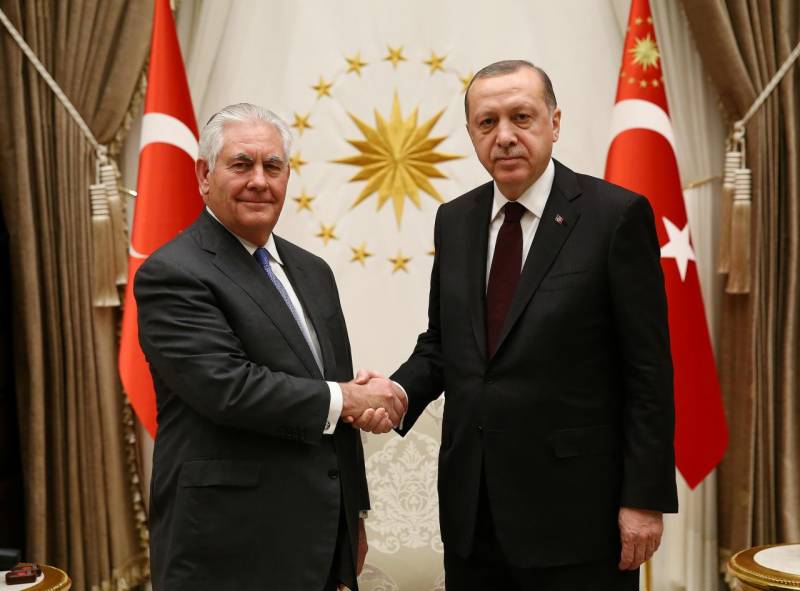 Ankara (Reuters): Top US diplomat Rex Tillerson and Turkey’s Tayyip Erdogan had a “productive and open” talk on Thursday about improving ties strained recently over their policies on Syria, in a meeting following weeks of escalating anti-American rhetoric from Ankara.

Tillerson arrived in Turkey on Thursday for two days of what officials have said would likely be uncomfortable discussions between the allies, whose relations have frayed over a number of issues, particularly US support for the Syrian Kurdish YPG militia, seen as terrorists by Turkey.

Turkey launched an air and ground assault last month in Syria’s northwest Afrin region to drive the YPG from the area south of its border. Ankara considers the YPG to be an arm of the PKK, a banned group that has waged a decades-long insurgency in Turkey.

The militia is the main ground element of the Syrian Democratic Forces (SDF), which the United States has armed, trained and aided with air support and special forces to fight Islamic State.

“The two engaged in a productive and open conversation about a mutually beneficial way forward in the US-Turkey relationship,” said a US State Department spokesman traveling with Tillerson.

In a photo distributed by the Turkish presidency before the start of the more than three-hour meeting, the two are shown shaking hands, although only Tillerson was smiling.

Erdogan conveyed his priorities and expectations on Syria, the fight against terror and other regional issues, a Turkish presidential source said.

Ahead of the meeting, Turkey had called for the United States to expel the YPG from the anti-Islamic State SDF forces it is backing in Syria.

“We demanded this relationship be ended, I mean we want them to end all the support given to the Syrian arm of PKK, the YPG,” Turkish Defense Minister Nurettin Canikli told reporters in a briefing in Brussels, a day after meeting US Defense Secretary Jim Mattis on the sidelines of a NATO meeting.

“We demanded this structure be removed from SDF,” he said.