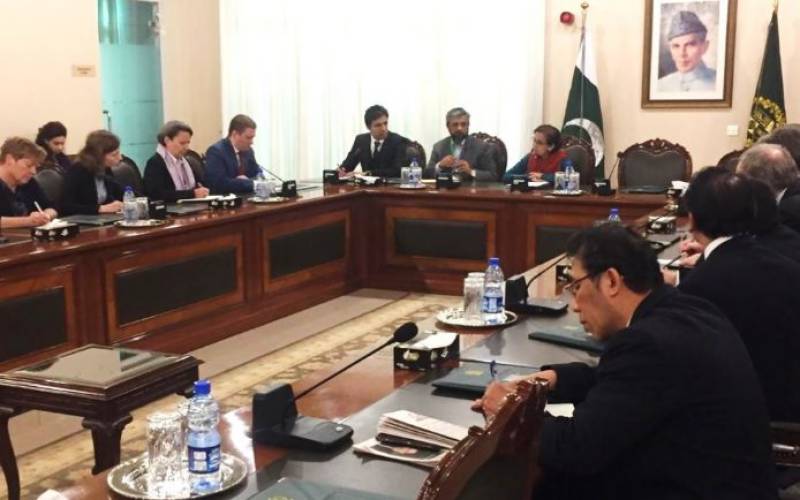 Islamabad (Staff Report/Agencies): Foreign Secretary Tehmina Janjua met with the ambassadors from the European at the Foreign Office in Islamabad on Saturday and underscored Pakistan’s position on the Pulwama attack in Indian occupied Kashmir.

The foreign secretary categorically rejected Indian government remarks of Pakistan’s involvement in the attack. She also raised the issue of gross human rights violations by the Indian occupation forces in occupied Kashmir.

She further raised the issue of gross #HumanRightsViolations being perpetrated by the Indian occupation forces in the occupied Jammu&Kashmir.

In #IoK, years of unabated HR violations has alienated #Kashmiris

Earlier, briefing the ambassadors from non-permanent members of the United Nations Security Council (UNSC), the foreign secretary said Indian claims regarding involvement of Pakistan in Pulwama attack were contradictory and unverified social media content had no grounds.

She pointed towards known tactics of India to divert global attention from gross human rights violations in held Kashmir.

Tehmina shared Pakistan's perspective with Ambassadors on unfounded allegations by India after the attack.

The foreign secretary emphasized continued importance of implementing the UNSC resolutions on Kashmir.

Meanwhile, Pakistan strongly condemned the continuing attacks on Kashmiris, in the aftermath of the Pulwama attack in Occupied Kashmir.

In a tweet message on Saturday, Foreign Office (FO) spokesperson Dr. Mohammad Faisal said, Pakistan strongly condemns the continuing attacks on Kashmiris in the aftermath of the Pulwama attack.

#Pakistan strongly condemns the Continuing attacks on Kashmiris, in the aftermath of the #Pulwamaattack in #IOK, including #Kashmiri students being systemically targeted in India as the state authorities stay complicit and inactive. #kashmirbleeds (1/2)

The FO spokesman further said that India must not use the Pulwama attack as a carte blanche to intensify its atrocities against innocent Kashmiris in the held Kashmir.

Following the Pulwama attack, Kashmiris have been targeted in IoK by Indian security forces and Hindu extremists.

The FO rejected unfounded allegations of India on Pakistan in the aftermath of a suicide attack in the Occupied Kashmir.

Moreover, Foreign Minister Shah Mehmood Qureshi, who is in currently on a visit to Germany, also asked India to refrain from levelling baseless allegations against Pakistan.

On Friday, Pakistan strongly rejected any insinuation that sought to link the attack to Pakistan without investigations.