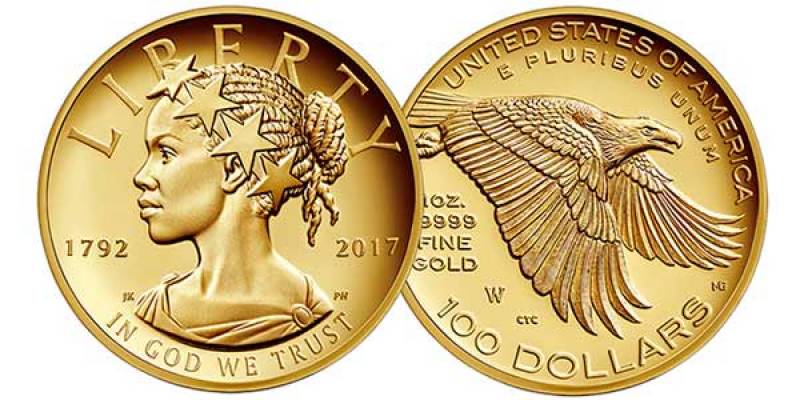 Washington (Reuters): The United States of America is set to issue a commemorative $100 gold coin that represents Lady Liberty -- a national symbol generally depicted as a white woman -- as an African-American for the first time.

In honour of the US Mint´s 225th anniversary, the 24-karat gold piece will be released, one of a series of coins that will feature a racially diverse array of Lady Liberties.

In a statement released Thursday, the Mint said, "the coins will depict an allegorical Liberty in a variety of contemporary forms -- including designs representing Asian-Americans, Hispanic-Americans and Indian-Americans among others."

He added that it is issuing the coins to "reflect the cultural and ethnic diversity of the United States."

On April 6 the new coin will be released, featuring the bust of a distinctly African-American Liberty, with a crown of gold stars.

Underneath appear the words "In God we trust" and the dates 2017 and 1792, the year Congress created the Mint.

The flip side of the coin features another potent US symbol, an eagle in flight.

The Mint´s principal deputy director, Rhett Jeppson said, "Our founding fathers realised the critical need for our fledgeling nation to have a respected monetary system, and over the last 225 years, the Mint has never failed in its mission."

Last April to diversify a white male cast of statesmen featured on American currency, the onetime slave-turned-abolitionist Harriet Tubman was named as the new face of the $20 banknote in another move, the first time an African American was picked to feature on US currency.

Tubman hero to African Americans for her escape from slavery in Maryland in 1849 to help run the legendary Underground Railroad that enabled thousands of slaves to flee to freedom in the 19th century, is strongly favoured by an open poll of more than 600,000 people.