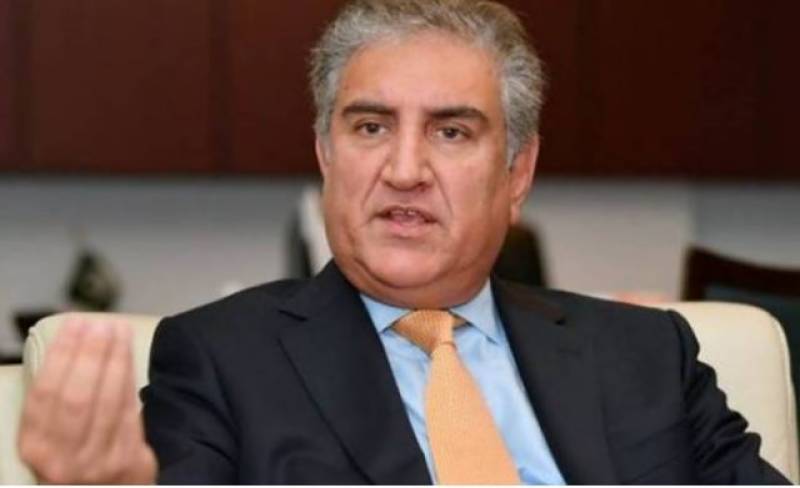 New York (Web Desk): Foreign Minister Shah Mahmood Qureshi has said discussion on occupied Jammu and Kashmir situation in the United Nations (UN) Security Council has once again affirmed that it is an internationally recognized dispute.

Talking to the media persons in New York, the foreign minister said the final disposition of the outstanding dispute must be done in accordance with the UN Security Council resolutions and the popular aspirations of Kashmiri people.

"Pakistan is gratified that the Security Council has once again considered the situation in occupied Jammu and Kashmir," the FM said.

Qureshi said that the UN in its briefing has confirmed India’s August 5 measures resulted in the rise of tensions and that the local situation remains tense.

He pointed out that UN Military Observer Group is also facing restrictions on the Indian side.

The foreign minister said that the UN has also reported on the human rights situation in occupied Kashmir and mentioned the excessive use of force, tear gas, rubber bullets and killings. The UN Secretary-General is monitoring the situation, he said.

"A solution should be found in accordance with the UN Charter, UN Security Council resolutions and bilateral agreements," the FM said.

He said that the Security Council remains seized of this matter. Such continuing international scrutiny will exert pressure on Modi Government to reverse its unilateral measures and stop its human rights as well as ceasefire violations and threats against Pakistan.

FM Qureshi reaffirmed Pakistan's stance to continue to serve as the voice of the oppressed Kashmiri people in the world.

Qureshi’s visit to the US comes amid heightened tensions between Washington and Tehran after the former killed Iranian commander Qassem Soleimani in a drone strike in Baghdad. Iran retaliated by targeting a US troops base in Iraq.

Talking about escalating tension in the Middle East, the foreign minister stressed that the region cannot afford a conflict and that diplomacy should be given a chance to de-escalate the situation.

"Pakistan will not become a party in the crisis rather it will make efforts for peace in the region," the FM said.