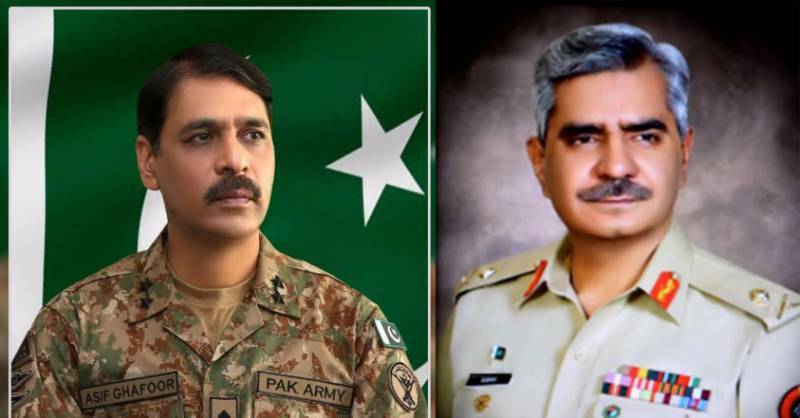 According to ISPR, Major General Asif Ghafoor’s services have been transferred to the 40th Infantry Division (Okara), where he will serve as the general officer commanding (GOC).

"Thanks to everyone I have remained associated with during the tenure," Maj Gen Ghafoor wrote on Twitter from the @OfficialDGISPR handle.

"My very special thanks to Media all across. Can’t thank enough fellow Pakistanis for their love and support.

"Best wishes to [the] new DG ISPR for his success," he added.

Thanks to everyone I have remained associated with during the tenure. My very special thanks to Media all across. Can’t thank enough fellow Pakistanis for their love and support.

Best wishes to new DG ISPR for his success.#PakArmedForcesZindabad#PakistanZindabad

Asif Ghafoor also posted a farewell message on his personal Twitter account, thanking the public for their support.

Thanks for your love & support. Stay strong, continue doing your bit for Pakistan.Stay blessed

Major Gen Asif Ghafoor was appointed as the DG ISPR in December 2016. He had replaced Lt Gen Asim Bajwa.

As per the ISPR website, Major General Asif Ghafoor was commissioned on September 9, 1988, in 87 Medium Regiment. He is a graduate of Command and Staff College Quetta, Command & Staff College Bandung (Indonesia) and NDU Islamabad. He holds a master's degree in strategic studies.

Major General Ghafoor is a recipient of the COAS Commendation Card for operations in Bajaur in 2008.

Who is Major General Babar Iftikhar?

He has served as a brigade major in an armoured brigade, brigadier staff in an infantry division in North Waziristan.

The major also served as a chief of staff in a corps headquarters. The senior officer has also commanded and armoured brigade and an infantry brigade in North Waziristan during Operation Zarb e Azab.