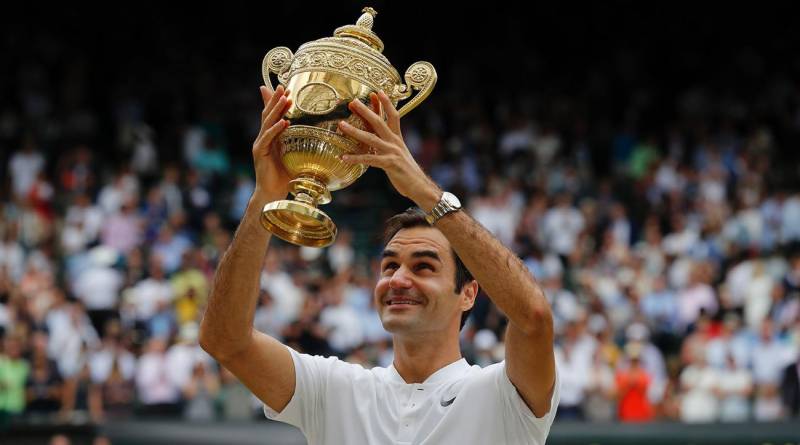 The Swiss maestro, appearing in his 11th Wimbledon final, was challenged early on but once he broke a nervous Cilic in the fifth game of the opening set the match became a no-contest.

Not that Federer was concerned as, 23 days before his 36th birthday, the father of four became the oldest men's singles champion at Wimbledon in the professional era -- taking the title back without dropping a set throughout the fortnight.

It continued a remarkable resurgence by Federer who returned from six months off at the start of the year to win the Australian Open -- ending a five-year wait for an 18th grand slam many thought would remain elusive.

Now he has 19 and looks capable of adding more.

"I've got to take more time off," Federer joked as his twin girls Myla Rose and Charlene Riva, who were there when he beat Andy Murray in the 2012 final, and twin boys Leo and Lennart, who were not, watched their father kiss the trophy he first won in 2003.

"Not to drop a set it's magical, I can't believe it just yet, it's too much really. It's just belief, that I can achieve such heights. I wasn't sure I would ever be here in another final. But I always believed I could maybe come back and do it again."

For seventh seed Cilic, his first final on Centre Court became a nightmare broadcast to hundreds of millions around the world. His legs looked heavy, his mind seemed a fuzz and at times he looked on the point of throwing in the towel -- breaking down in tears at 0-3 in the second set.

"It's cruel sometimes and he's a hero so congratulations on a wonderful tournament," Federer, whose tears were those of joy, said generously. "Sometimes you don't feel great in the final and it's cruel."

After a reasonably solid start, in which he had the final's first break point, Cilic cracked after dropping serve at 2-2 when his backhand went AWOL after a tumble earlier in the game.