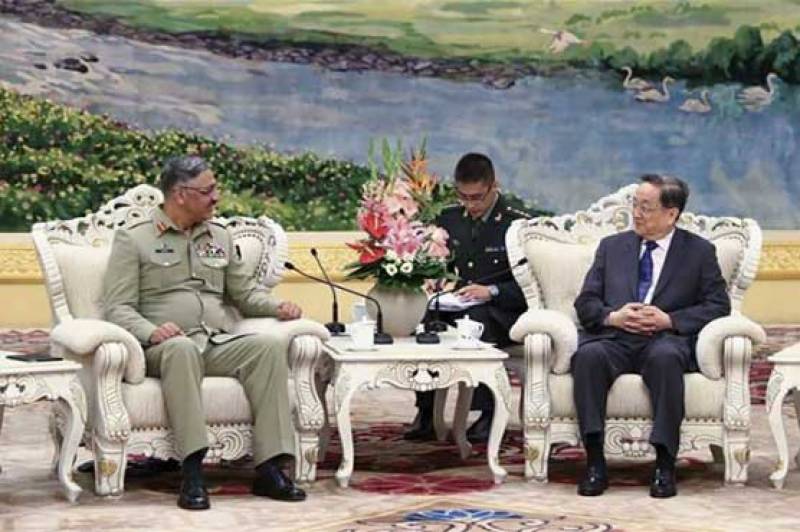 Beijing, China (APP): Chairman of the Joint Chiefs of Staff Committee (CJCSC), Gen. Zubair Mahmood Hayat met with China’s top political advisor Yu Zhengsheng 12th China-Pakistan Defense and Security Consultation held in Beijing on Friday to enhance military-to-military cooperation so as to safeguard the security of both countries as well as regional peace and stability.

Yu Zhengsheng appreciates the Pakistani government and military’s firm support for China in fighting terrorism while praising the traditional all-weather friendship between China and Pakistan.

Yu, chairman of the National Committee of the Chinese People’s Political Consultative Conference (CPPCC), also called for implementation of the consensus reached by the leaders of both countries to promote the construction of the China-Pakistan Economic Corridor (CPEC) and forge a community of shared future.

General Zubair assured that Pakistan will increase cooperation between the two militaries and provide security for the construction of the economic corridor.

Member of China’s Central Military Commission (CMC) Gen. Fang Fenghui said that the bilateral military relations between China and Pakistan have maintained a healthy and stable development momentum, as both countries cooperate with each in the areas of high-level contacts, joint training, weapons and equipment, anti-terrorism operations.

He also stressed while speaking the defense and security consultation that the Chinese side will unswervingly practice the important consensus reached by the Chinese President Xi Jinping and Pakistani leaders, deepen the cooperation between the two militaries and work together with Pakistani military to jointly safeguard the security of the China-Pakistan Economic Corridor.

Fang further stated that Chinese military will promote the development of the Quadrilateral Cooperation and Coordination Mechanism in Counter Terrorism by Afghanistan-China-Pakistan-Tajikistan Armed Forces (Four-nation counter-terror Mechanism), elevate the level of cooperation between the two militaries and jointly maintain the security and stable development of the region,.