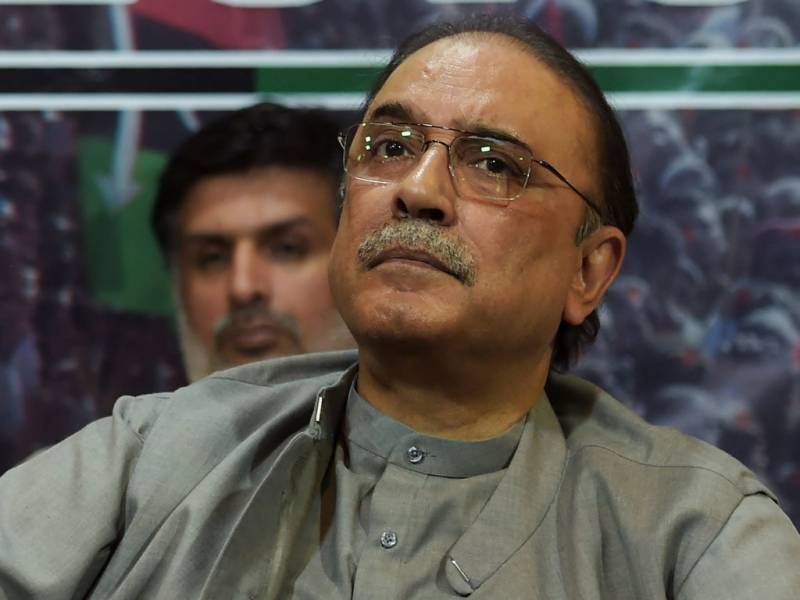 Speaking during a crucial meeting of the Pakistan Democratic Movement (PDM) through a video link in Islamabad, he said that that resigning from the assemblies would strengthen Imran Khan, adding that the PPP prefers to fight staying in the parliament.

"I have spent 14 years of my life in jail. We fought the Senate elections together but Senator Ishaq Dar did not come to vote in election for Senate chairman and deputy chairman. If we have to fight, we all will have to go to jail. So, Mian sahib, please come back to Pakistan," Asif Ali Zardari was quoted by sources as saying.

The former president said that it was not the first time that the democratic forces faced such rigging in the elections.

Zardari said that resigning from the assemblies will make Imran Khan and the establishment stronger.

He urged that the PDM should take all the decisions with consensus.

“The PPP is a democratic party and we will fight while staying in the parliament,” the former president said.

Responding to Asif Zardari, PML-N Vice President Maryam Nawaz said that her father would return to Pakistan if the PPP co-chairman is ready to give guarantees of his life.

She said that Nawaz Sharif faced serious life threats in the NAB’s custody, adding that her father suffered two heart attacks in jail.

Maryam further said that despite being the largest party in the opposition, the PML-N voted for PPP's Yousuf Raza Gilani in Senate elections, following PDM's decision.

The sources revealed that Asif Ali Zardari apologised to Maryam if his statement regarding the return of Nawaz Sharif had hurt her.

In response, the PML-N vice president said that her intention was not to seek an apology.

"I respect you like your Bakhtawar and Asifa Maryam Nawaz added.

Earlier on Monday, PPP Chairman Bilawal Bhutto Zardari had stated that he did not favour en masse resignations of the opposition's legislators at this stage.

Addressing a press conference in Hyderabad, the PPP leader had said that the resignations from the assemblies should be used as an atom bomb, as the last option.