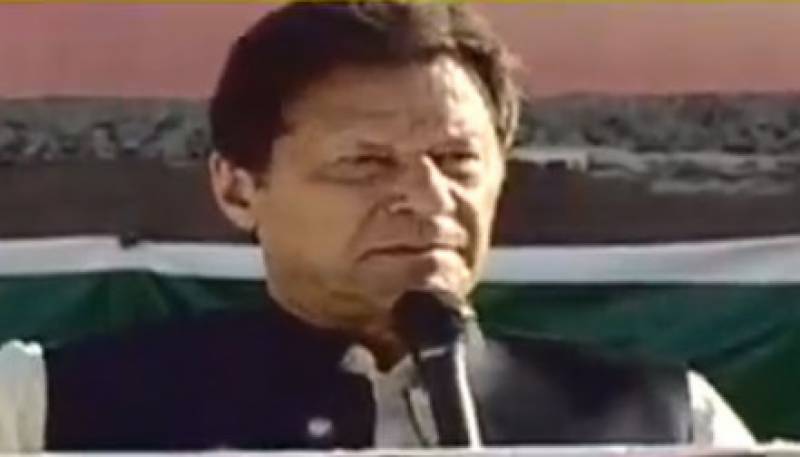 Swat (Web Desk): Prime Minister Imran Khan has accused the opposition of horse-trading to win no-confidence motion against him in the National Assembly.

Addressing a political gathering in Swat's Saidu Sharif, the premier said that Islamabad’s Sindh House was being used to buy the loyalties of lawmakers.

PM Imran said that the coming days were decisive for the country as all the "thieves" had gathered on the same page and they have given "me a chance to bowl out three wickets in a single ball".

Criticising the leaders of key opposition parties including Pakistan Muslim League-Nawaz (PML-N) president Shehbaz Sharif, Pakistan Peoples Party (PPP) co-chairman Asif Ali Zardari and Jamiat Ulema-e-Islam-Fazl (JUI-F) chief Maulana Fazlur Rehman, PM Imran said that they brought the no-confidence motion against him as they were afraid that they will end up in prison in corruption cases if the Pakistan Tehreek-e-Insaf (PTI) stayed in power for longer.

"I will hunt the three 'mice' who are out to hunt me," Imran Khan said.

During the rally, Imran also praised the Foreign Office (FO) and his government for getting a resolution against Islamophobia passed in the United Nations (UN).

He said that the incumbent government struggled for three years and at last succeeded in passing a landmark resolution at UN designating March 15 as "International Day to Combat Islamophobia."

"Opposition never took up the issue of Islamophobia at the UN or the Organisation of Islamic Cooperation (OIC) because they had “no belief system”. They only worship money, Imran added.

He said the Muslim community in the west suffered the most from Islamophobia.

The prime minister said terrorists have no religion and Islam has nothing to do with terrorism but the west has always linked Islam with terrorism.

Criticizing the fascist Indian regime, Imran Khan said the Karnatak court has banned wearing of head scarf for women which is the worst example of Islamophobia.

Speaking about his government, the prime minister said that the PTI-led government has steered the country out of difficult times including corona and economic instability.

"The whole world has acknowledged our strategy during the coronavirus pandemic," PM Imran said.

He said the government has achieved record production of wheat, maize and rice besides record revenue generation through tax reforms.

PM Imran said that Pakistan saw four hundred drone attacks from 2008 to 2018 but the past regimes could not even condemn these attacks because they have billions of dollars abroad and off-shore companies.

Speaking about the upcoming PTI rally in Islamabad, he urged the people to come to Islamabad on March 27, a day ahead of the no-confidence vote, to show that they stood with truth and against the “slaves of America”.