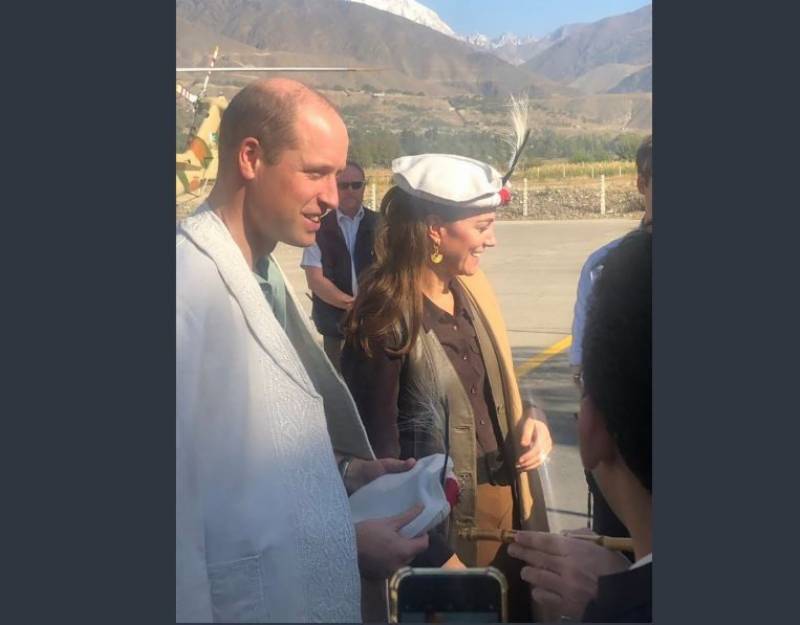 Chitral (Staff Report/Agencies): The Duke and Duchess of Cambridge – Prince William and Kate Middleton – on Wednesday arrived in Chitral on the third day of their five-day visit to Pakistan.

On arrival, they were received by area notables and high officials.

Both of them were worn the traditional Chitrali cap and Cloak on the occasion.

The royal couple reviewed damages occurred by the floods in the district and impact of climate change on melting of glaciers. They also took an aerial view of Hindukush and Himalaya mountain ranges.

They appreciated the initiatives undertaken by the Government of Pakistan to combat climate change and to alleviate poverty.

The Royal couple appreciated the initiatives undertaken by the Pakistan Government to combat climate change and to alleviate poverty.

British Prince, William, and his wife, Catherine (Kate) Elizabeth Middleton, known as the Duke and Duchess of Cambridge respectively arrived in Islamabad Monday evening on a five-day visit to Pakistan.