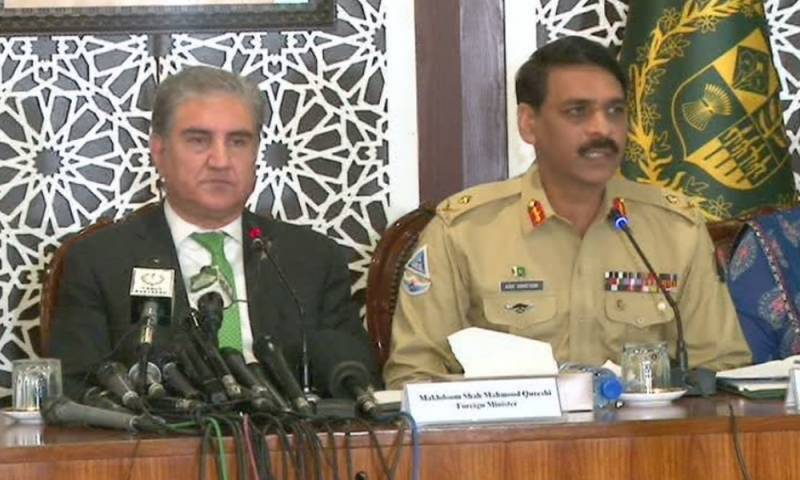 Islamabad: (Web Desk): Foreign Minister Shah Mahmood Qureshi while addressing a joint press conference with Director General of Inter-Services Public Relations (ISPR) Maj Gen Asif Ghafoor on Saturday, said that Pakistan's armed forces and nation are fully ready for defense of the homeland and give a befitting response to any Indian aggression.

The news briefing was held following a meeting of the special committee on Kashmir which discussed the future course of action on Kashmir dispute.

Giving details of the decisions taken in the meeting, the foreign minister said said a special cell on Kashmir would be constituted at the Pakistan Foreign Office, which would be responsible for devising a future course of action on the prevailing situation in occupied Kashmir, subject to his approval.

He announced that a Kashmir desk would also be established in all Pakistani embassies around the world in light of the ongoing crisis.

Qureshi said Pakistan is keeping a close eye on the evolving situation in occupied Kashmir and the process of consultations will continue.

The foreign minister also warned the international community that India can carry out any false flag operation near the Line of Control (LoC) to divert world attention from its illegal actions and human rights violations in occupied Kashmir.

"We want to inform the world that we are suspicious of India's intentions," Qureshi said.

He, however, said the nation and its institutions are ready to respond to any Indian belligerence.

Lauded the historic United Nations Security Council (UNSC) meeting held on Friday, the foreign minister said that the meeting on Kashmir issue is a big diplomatic victory of Pakistan and defeat of India.

Responding to a question about the UNSC meeting on Kashmir issue, the foreign minister said the meeting could not be held if all the members did not have consensus. He said India made efforts to prevent the meeting, but its viewpoint was rejected.

He said this was a continuing process and the country will fight the Kashmir cause on all fronts.

“Today's India is not that of Nehru but of Modi and there is a clear difference between the two”, FM Qureshi noted.

Referring to the situation of occupied Kashmir, he said the Kashmir people offered Friday prayers at open places despite the imposition of curfew by the occupying forces. He said Kashmiri people resorted to protests after the prayers. This was only a reflection as to where the situation will turn once the curfew is lifted in the occupied territory.

Shah Mahmood Qureshi said the Organization of Islamic Cooperation (OIC) and human rights organisations have demanded for lifting of curfew from occupied Kashmir. He said this is a human rights issue and the world powers should fulfill their responsibilities in this regard.

In his remarks, Director General ISPR Major General Asif Ghafoor said occupied Kashmir has been turned into a prison by the occupying forces.

The DG ISPR rejected Indian propaganda that Pakistan is supporting infiltration inside occupied territory. He said India is resorting to such propaganda to carry out a false flag operation.

“Pakistan's armed forces are fully ready for defense of the homeland and give a befitting response to any Indian aggression,” the DG ISPR said.

Answering a question regarding the statement of the Indian Defence Minister, the DG ISPR said sane nations don not talk in this way.

“Kashmir is a nuclear flashpoint and both Pakistan and India are nuclear powers. The world should see into the statement given by the Indian defence minister”, the DG ISPR said.