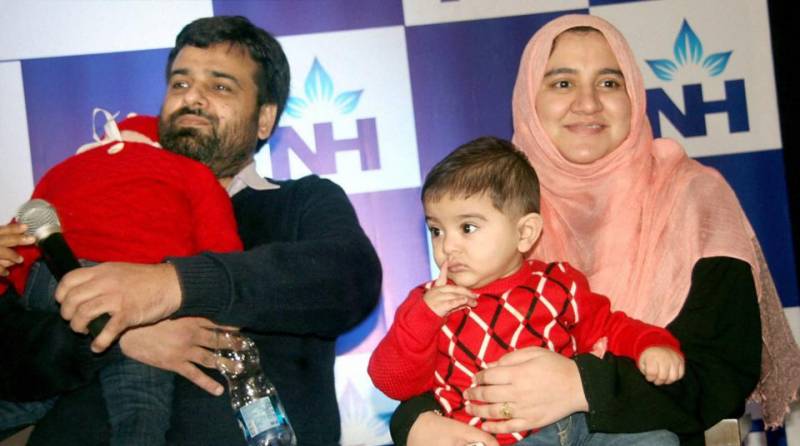 The two-and-a-half-year-old Zeenia, hailing from Sahiwal in Pakistan, was suffering from HLH, a rare disease in which bone marrow produces some abnormal cells which eat away the normal cells, resulting in high fever, low blood counts, liver and spleen enlargement, doctors said.

Calling it a potentially life threatening disorder, doctors said the only cure for this condition was bone marrow transplant. Zeenia was also diagnosed to have partial albinism since birth as well, they added.

“After we diagnosed the girl was suffering from HLH, we discovered that her brother was Human leukocyte antigen (HLA) match for her,” said Dr Sunil Bhat, Senior Consultant and Head of Pediatric Hematology, Oncology and Bone Marrow Transplant at Narayana Health City hospital.

“As the donor is just eight months old to collect the adequate dosage, he was required to undergo the donation process twice at a gap of only few weeks,” Dr Bhat said.

“By using small marrow extraction needles and with the assistance of a team of anaesthetists and other members, we have successfully extracted enough marrow which helped cure Zeenia. Rayan has not only saved his sister, he also has the unique distinction of being the youngest marrow donor in India,” he added.

Doctors said the procedure was conducted in October, and Zeenia is cured of her “deadly disease” and ready to leave for Pakistan to lead a normal life. They have advised her parents about certain follow-ups that Zeenia needs to undergo after going back home.

Zeenia had earlier undergone treatment at an armed forces hospital in Rawalpindi.

Stating that there was “general fear factor” when they landed in India, Zeenia’s father Zia Ulla said his daughter was now fine and recovering.

“From the time we landed following immigration I would say it was a very pleasant surprise ... everyone was very fine and friendly,” he said.

Expressing similar sentiments, Zeenia’s mother Farzeen said it was very difficult for them to decide on bone marrow donation from her eight-month old son. “Obviously both children are important for us. When we got to know that they are match siblings and it was a promising option, we decided to take risk,” she said.