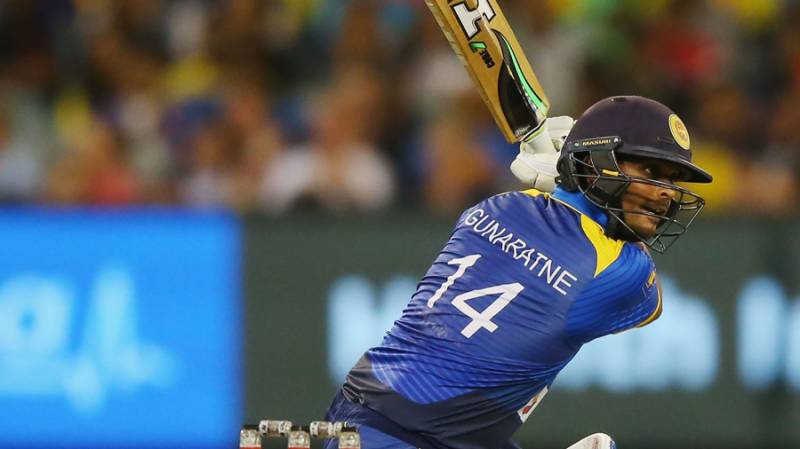 Melbourne: There is nothing like a last ball victory when the required run is one and a batsman smashes it for four. The same happened when Sri Lankan Chamara Kapugedera smashed a four off the last ball to give Sri Lanka a thrilling five-wicket victory over Australia in their first Twenty20 international at the Melbourne Cricket Ground on Friday.

The win kept Sri Lanka unbeaten in four T20 internationals in Australia and followed their 2-1 series win over South Africa last month.The pulsating win was made possible by a dashing 52 off 37 balls by Asela Gunaratne, who was named man-of-the-match for his match-turning innings.

It was a tense finish with skipper Aaron Finch making fielding changes before every ball to prevent Sri Lanka from getting home.

But it was Kapugedera who stood up to the pressure and slammed fast bowler Andrew Tye´s final delivery through the covers to the boundary rope for the winning hit.

The win put Sri Lanka one up in the series with two matches to play in Geelong on Sunday and Adelaide on Wednesday.

For a time it looked as though the Australians, playing without their leading stars, Steve Smith, David Warner, Mitchell Starc and Josh Hazlewood all on tour in India, would hold off the fast-finishing Sri Lankans.

The home side posted a competitive total of 168 for six off their 20 overs with skipper Finch smashing two sixes and two fours in his topscoring 43 off 34 balls.

Finch shared in an opening stand of 76 with T20I debutant Michael Klinger.

Klinger, making his debut at the age of 36 after starring with the Perth Scorchers in the domestic Big Bash League, hammered 38 off 32 balls with four boundaries.

Lasith Malinga, who has played virtually no cricket for nearly a year due to injuries, was an influential figure taking two wickets in two balls and taking two catches.

Malinga claimed the wickets of Travis Head for 31 off 24 balls and debutant Ashton Turner for 18 off 13 balls, both caught by Seekkugge Prasanna at deep mid-wicket.

Malinga finished with two wickets for 29 off his four overs.

Paceman Pat Cummins struck with the last ball of his opening over getting skipper Upul Tharanga to edge to wicketkeeper Tim Paine for a duck in the first over of the Sri Lanka innings.

Dickwella, who slammed four fours and a six, looked to flick Zampa over mid-wicket only to lob a leading edge to Klinger at short third man in the ninth over.

Dilshan Munaweera smashed a breezy 44 off 29 balls with six fours before he hit a short ball from Zampa to mid-wicket where Finch took a head-high catch.

But Gunaratne took charge and his half-century turned the tide to set up the thrilling victory for the Sri Lankans.