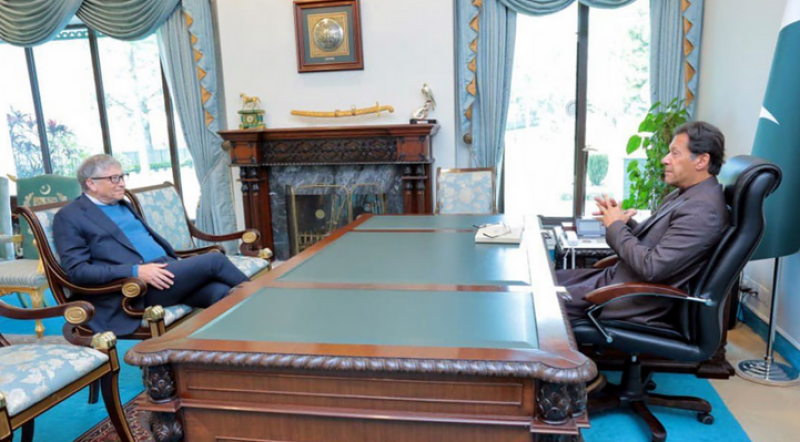 As per the details, the noted philanthropist, who is on a first-ever visit to Pakistan, landed at Nur Khan Air Base in the country’s federal capital and was welcomed by government officials.

According to a statement issued by the Prime Minister's Office (PMO), Gates attended a meeting of the National Task Force on Polio Eradication, where he noted that despite COVID-19 restrictions, Pakistan's has performed "amazingly" in eradicating polio.

He thanked PM Imran for inviting him and extending warm hospitality on his first-ever visit. He appreciated the efforts of the leadership, health workers, and parents for working tirelessly to ensure that polio never paralyses a child again.

During the meeting, the prime minister thanked the Bill & Melinda Gates Foundation for its continued support and partnership with the Government of Pakistan in polio eradication.

The prime minister underlined that the government is fully committed and determined towards polio eradication.

"Pakistan is providing full support for the sake of 40 million Afghan people in need of basic amenities," the prime minister informed the philanthropist.

In the meeting, the prime minister also directed deputy commissioners of the districts adjoining Afghanistan borders, particularly the southern districts of Khyber Pakhtunkhwa, to remain vigilant and proactive against contamination of poliovirus.

"The task force paid tributes to the 36 frontline workers and 14 law enforcement personnel who lost their lives during polio vaccination to the children across the country," the statement from the PM Office said.

Earlier, the task force was briefed that Pakistan has completed one year of zero polio incidence.

However, the virus has been detected in environmental samples in the southern districts of Khyber Pakhtunkhwa and Balochistan province.

The meeting was apprised that national-level polio vaccination campaigns have been launched on December 2021 and January 2022 with the integration of routine immunisations for children, the statement said.

"There is effective coordination among federal and provincial governments with support from law enforcement agencies for [the] provision of security in risk areas," the statement said.

Meanwhile, Bill Gates along with his delegation visited the National Command and Operation Centre (NCOC).

According to a statement issued by the NCOC, the delegation attended forum's morning session.

"During the session, Gates and his delegation were apprised about the NCOC's role and methodology, its achievements since the start of the pandemic, the recent COVID-19 situation across Pakistan and various restrictions imposed by the forums to control disease spread and ensure public safety and well being," the statement added.

A comprehensive review of Pakistan’s efforts against COVID-19 along with a briefing on genome sequencing (prevalence of various variants in the country) was presented to visiting dignitaries.

NCOC chief Asad Umar acknowledged the efforts of the philanthropist and Bill and Melinda Gates Foundation to support COVID-19 initiatives in Pakistan, while the former appreciated Pakistan’s success in the fight against the pandemic despite resource constraints.