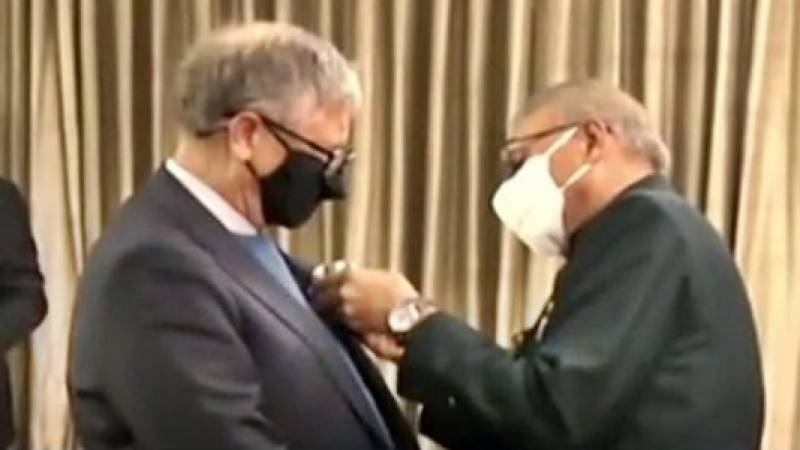 Islamabad (Web Desk): President Dr Arif Alvi on Thursday conferred Hilal-e-Pakistan on American technologist and philanthropist Bill Gates in recognition of his philanthropic efforts and his support for poverty alleviation and health care.

According to details, a special investiture ceremony was held at Aiwan-e-Sadr in Islamabad, where the president presented Gates with the country’s second-highest civil award, given to people for their meritorious contribution to the national interests of Pakistan.

The ceremony was attended by federal ministers, senior officials and members of diplomatic corps.

During the meeting, the Microsoft owner was briefed over eradication of polio from the country and the government's measures to contain spread of coronavirus across the country.

The noted philanthropist, who is on a first-ever visit to Pakistan, landed at Nur Khan Air Base in the country’s federal capital and was welcomed by government officials.

Meanwhile, Bill Gates along with his delegation visited the National Command and Operation Centre (NCOC).

According to a statement issued by the NCOC, the delegation attended forum's morning session.

"During the session, Gates and his delegation were apprised about the NCOC's role and methodology, its achievements since the start of the pandemic, the recent COVID-19 situation across Pakistan and various restrictions imposed by the forums to control disease spread and ensure public safety and well being," the statement added.

A comprehensive review of Pakistan’s efforts against COVID-19 along with a briefing on genome sequencing (prevalence of various variants in the country) was presented to visiting dignitaries.

NCOC chief Asad Umar acknowledged the efforts of the philanthropist and Bill and Melinda Gates Foundation to support COVID-19 initiatives in Pakistan, while the former appreciated Pakistan’s success in the fight against the pandemic despite resource constraints.

Moreover, the delegation also visited the anti-polio programme, where he was briefed by the programme’s chief Dr Shehzad Baig and was informed of COVID-19 and polio prevention measures being taken in the country.