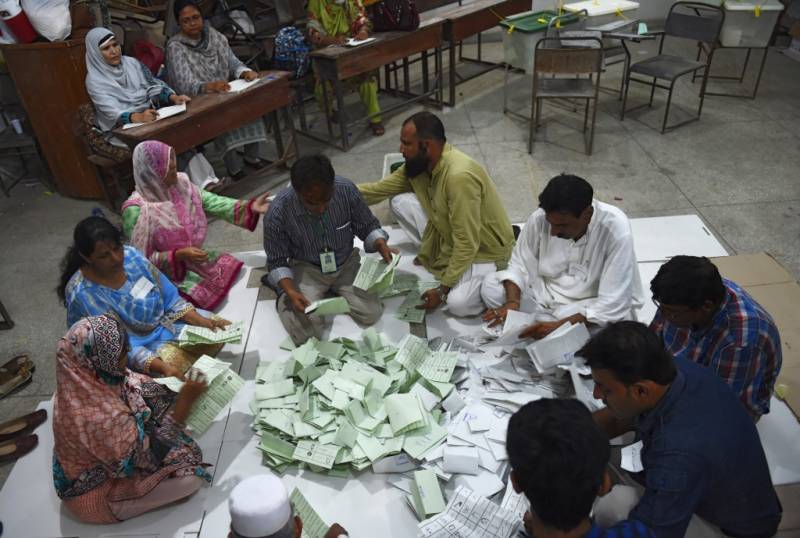 Lahore (Staff Report/Agencies): The Pakistan Tehreek-e-Insaf (PTI) on Sunday crushed the PML-N by winning at least 15 seats in the by-elections on 20 seats held in 14 districts of the province.

As per unofficial results, PTI won five seats in central Punjab, five in north and as many in south Punjab.

The polling started at 8:00AM and continued till 5: 00PM with Section 144 implemented to establish law and order in the province.

All the seats fell vacant after the Election Commission of Pakistan (ECP) de-seated PTI MPAs for defection due to former prime minister Imran Khan’s petition. The result will decide whether PTI or PML-N gets to install the CM of their choice, which could also effect next general elections.

The ECP has established at least 3,131 polling stations in these 20 constituencies, out of which 676 have been declared highly sensitive and about 1,194 sensitive.

The chief election commissioner has urged the voters to “vote for their favourite candidates today” in a bid to “not only strengthen democracy but also bless Pakistan with stability.” He also directed law enforcement agencies not to allow any violations of law or violent incidents across the constituencies.

In the video, PTI’s official Twitter account, an open cargo bed can be seen claiming wheat flour being “openly distributed” in Rawalpindi’s PP-7 constituency as the ECP “sleeps”.

“There were reports that PTI workers were carrying weapons in Sheikhupura and would try to disrupt the peace,” Tarar claimed in tweet.

The ECP has issued directives to the district returning officer to inspect the location and receive a briefing from security officials.

The ECP spokesperson said in a tweet that CEC Sikander Sultan Raja has issued instructions to the provincial chief secretary and Punjab inspector general of police that no “retaliatory action” should be taken against any civilian or else “ECP will take strict action against it”.

PTI leader Fawad Chaudhry has predicted that his party will win 16 of the 20 seats.