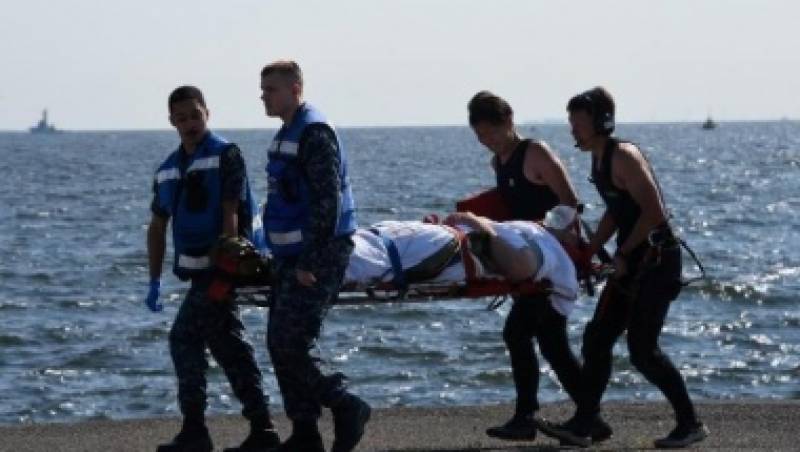 The Japanese Coast Guard said the destroyer was experiencing some flooding but was not in danger of sinking, while the merchant vessel was able to sail under its own power.

The U.S. Navy said in a statement the USS Fitzgerald, an Aegis guided missile destroyer, collided with a merchant vessel at about 2:30 a.m. local time (1730 GMT), some 56 nautical miles southwest of Yokosuka, a rare incident on a busy waterway. Three aboard the destroyer had been medically evacuated, including the ship's commanding officer, Cmdr. Bryce Benson, who was reportedly in stable condition after being airlifted to the U.S. Naval Hospital on the Yokosuka base, the Navy said.

The other two injured were transferred to the hospital to treat lacerations and bruises, it said. The Fitzgerald, the Japanese Coast Guard and Maritime Self-Defense Force were searching for the seven missing sailors.

Benson took command of the Fitzgerald on May 13. He had previously commanded a minesweeper based in Sasebo in western Japan.

It was unclear how the collision happened. "Once an investigation is complete then any legal issues can be addressed," the 7th Fleet spokesman said.

"The USS Fitzgerald suffered damage on her starboard side above and below the waterline," the Navy said in a statement.

The full extent of damage to the ship and injuries to its crew were still being determined, it said, adding that the Fitzgerald was operating under its own power, "although her propulsion is limited". The ship, part of an eight-ship squadron based in Yokosuka, had in February completed $21 million worth of upgrades and repairs.

A spokesman for the U.S. 7th Fleet said the ship was heading back to Yokosuka under its own power at 3 knots.

Japan's Nippon Yusen KK (9101.T), which charters the container ship, ASX Crystal, said in a statement it would "cooperate fully" with the Coast Guard's investigation of the incident. At around 29,000 tons displacement, the ship is about three times the size of the U.S. warship, and was carrying 1,080 containers from the port of Nagoya to Tokyo.

None of the 20 crew members aboard, all Filipino, were injured, and the ship is not leaking oil, Nippon Yusen said. The ship was due to arrive at Tokyo Bay around 4:30 p.m. (0730 GMT), the Coast Guard said.

The waterways approaching Tokyo Bay are busy with commercial vessels sailing to and from Japan’s two biggest container ports in Tokyo and Yokohama.

International maritime rules for collision avoidance do not define right of way for any one vessel, but provide common standards for signaling between ships, as well as regulations on posting lookouts.

The USS Dewey and two Navy tugboats had been dispatched to provide assistance to the damaged destroyer, the Navy said.

Japan's public broadcaster NHK showed aerial footage of the ship, which had a large dent in its right, or starboard, side. Images broadcast by NHK showed it had been struck next to its Aegis radar arrays behind its vertical launch tubes.

The images showed what appeared to be significant damage on the deck and to part of the radar. NHK also showed footage of the container vessel and said it was heading towards Tokyo under its own power.

In May, the U.S. Navy's USS Lake Champlain collided with a South Korean fishing vessel but both ships were able to operate under their own power.

The 7th Fleet commander, Vice Admiral Joseph Aucoin, thanked the Japanese Coast guard in a post on the fleet's Facebook page, adding: "We are committed to ensuring the safe return of the ship to port in Yokosuka."