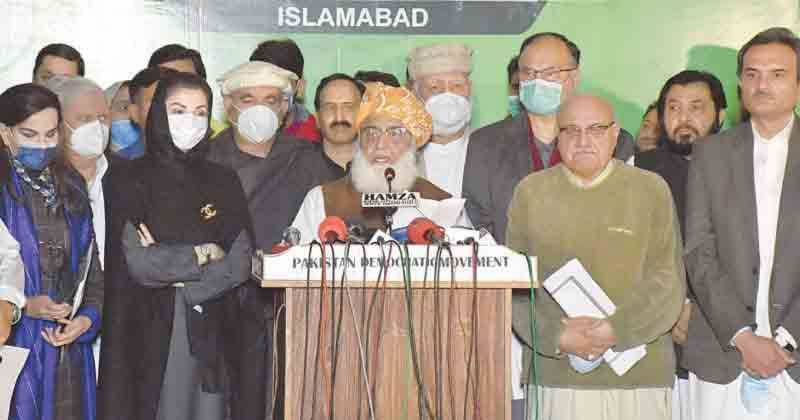 Addressing a press conference in the federal capital along with allies, PDM’s chief Maulana Fazlur Rehman said that the decision decision to postpone the long march was taken as the Pakistan Peoples Party (PPP) was reluctant to tender resignations from assemblies.

“The PPP has expressed its reservations over linking the resignations with the long march,” the PDM chief said.

Maulasna Fazlur Rehman added that PPP will inform about decision on resignation after holding a meeting of its Central Executive Committee (CEC).

"Until then, the long march must be considered postponed," the JUI-F said.

The PDM chief then abruptly quit the press conference without responding to the questions of the newsmen leaving Pakistan Muslim League-Nawaz (PML-N) Vice President Maryam Nawaz and PPP's Senator Yousaf Raza Gillani behind for explanation.

Speaking to the reporters, Maryam refrained from commenting on the PPP’s stance, saying she did not want to create speculations.

In response to a question, Maryam Nawaz confirmed the reports that in the meeting PPP leader Asif Zardari asked her father Nawaz Sharif, who has been living in London in a self-exile for more than a year, to return to the country, if he wanted to get their resignations.

“I respectfully told them that return of Nawaz Sharif will be tantamount to handing him over to killers,” she said.

“Neither the PML-N leaders nor the PML-N’s voters want any danger to his life,” Maryam said, adding that the country needs to have alive leaders and not their dead bodies.

Maryam Nawaz said she told Mr Zardari that sacrifices and struggle of Mr Sharif was not hidden from any one. She said her father had faced worst and longest imprisonment and even suffered heart attacks while in custody.

The PML-N vice president claimed that the government had allowed Nawaz Sharif to go abroad in a panic after seeing that his life was in danger.

“No one had the right to ask Nawaz Sharif to come back,” She said, adding that if anyone wanted to talk to the PML-N supremo then he should talk to her as a representative of Nawaz Sharif.

Maryam said that the PML-N was united under the leadership of Nawaz Sharif and that she and other leaders of the party were present in the country to continue their struggle.

Earlier, PPP’s co-chairman Asif Ali Zardari, who attended the meeting via video link, urged former prime minister and PML-N supremo Nawaz Sharif to come back to Pakistan to boost the struggle for the consolidation of democratic institutions.

"I have spent 14 years of my life in jail. We fought the Senate elections together but Senator Ishaq Dar did not come to vote in election for Senate chairman and deputy chairman. If we have to fight, we all will have to go to jail. So, Mian sahib, please come back to Pakistan," Asif Ali Zardari was quoted by sources as saying.

He urged that the PDM should take all the decisions with consensus.

Zardari said that resigning from the assemblies will make Imran Khan and the establishment stronger.

“The PPP is a democratic party and we will fight while staying in the parliament,” the former president said.