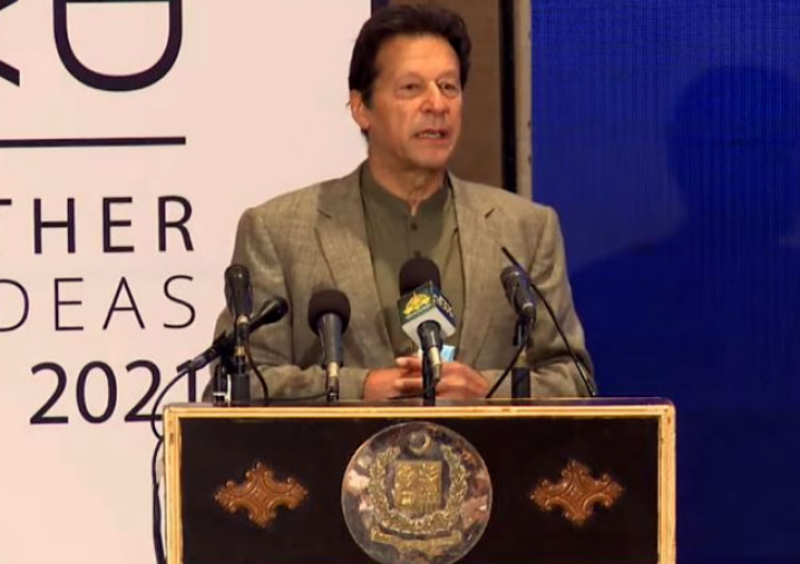 Islamabad (Web Desk): Prime Minister Imran Khan on Wednesday said that Pakistan needs to get stronghold of national security by expanding its domain to key areas including climate change, economic stability and food security, besides focusing on military strength.

He said this while addressing the opening session of the first ever two-day Islamabad Security Dialogue, organised by the National Security Division (NSD).

“A secure State is where common people own it and believe that they have stakes in it,” he said, pointing that the goals of national security could not be achieved in an environment with handful of affluent and a sea of poor populace.

He termed food security a big challenge for Pakistan in the coming decades and expressed concern over the unprecedented situation of importing of 4 million ton wheat in a year.

He said the government will launch a comprehensive program about food security.

Commenting on regional peace, said economic prosperity cannot be sustained without peace in the neighborhood.

He said India must commit to giving Kashmiris their right to self-determination as per the United Nations Security Council (UNSC) Resolutions.

Imran Khan said he offered dialogue to India when he came into government but unfortunately India took illegal actions on 5th August 5, 2019.

He said Kashmir is the core issue between Pakistan and India and if a peaceful resolution of the issue is found by giving Kashmiris the right to self-determination it would be beneficial for both countries.

The premier said Pakistan wishes for a political settlement in Afghanistan that can lead to sustainable peace.

He said peace in Afghanistan is the key to unlocking the connectivity potential of the region.

He lauded the efforts of the Army, intelligence and civilian law enforcement agencies for playing a monumental role in the fight against terrorism.

PM Khan said under his government the country is able to fight a debilitating current account deficit, increase exports and Foreign Direct Investment.

He said unlike before, his government is undertaking dedicated climate security programs, including the internationally renowned 10 billion tree tsunami, the Radio Pakistan reported.

He said we have administered the largest cash transfers in Pakistan's history completely transparently. Furthermore, the government has successfully managed the COVID pandemic while protecting the poor. He said that even the world recognized our success.

On the occasion, the prime minister launched the National Security Advisory Portal which will take onboard thinktanks, intellectuals and security experts to give input on matters related to national security.

Underlining the need for debate on national security, he said the input of intellectuals and academia will help the relevant institutions devise national security policy. He said this will also lead to national cohesion.

Speaking on the occasion, Special Assistant to the Prime Minister (SAPM) on National Security Dr Moeed Yousaf said the first ever Islamabad Security Dialogue was in line with Prime Minister Imran Khan’s vision who had pointed out about the gap between strategic thinkers and the government’s policy-makers.

He said that the NSD had developed strategies focusing on leveraging Pakistan’s economic footprint and also stressing upon a cultural shift to promote the country’s soft image abroad.